In July 2008, WALL-E was released on big screens across the United States (you can see my original review here). This little robot had a big message to share with us… and not the message you might think. Yes, there were themes of environmental awareness and paying more attention to the world around you. But there was a larger message to the entertainment industry. 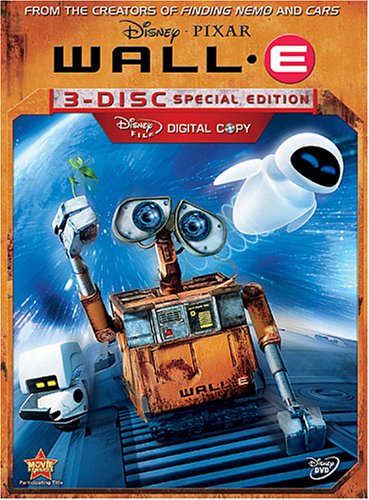 Stories that use the techniques from silent film, slapstick, and vaudville can still entertain audiences. Who knew such a small robot packed such a huge punch?

And with WALL-E coming to DVD this November, we can all relive the magic of what we saw on the big screen!

The 3-Disc Special Edition has two DVDs packed with great extras and a third DVD that provides a special digital copy so you can use it on the go.

Disc 1 includes the movie of course, as well as some fun bonus features.

“BURN-E” fills in what happens to the poor BURN-E robot outside the ship. This poor little robot goes through the wringer trying to replace a simple light on the outside the Axiom. BURN-E’s job is to replace it. And this little 7 minute movie is integrated with what’s happening on board the Axiom while WALL-E is on board. It’s great to see some of those fun scenes from a different perspective!

“Presto” is of course the short film about the Amazing Presto and his rabbit Alec that preceded WALL-E‘s theatrical release. Alec adds a bit of mystery to Presto’s act that goes beyond his stage presence — all for a tasty carrot.

In addition, you have two deleted scenes. “Garbage Airlock” is an extended scene of what occurred in the garbage airlock when WALL-E was trying to rescue EVE from being crushed and ejected into space. It is a bit different than the scene that ended up in the movie and definitely worth watching. “Dumped” was the second deleted scene and was unfinished. It focuses on WALL-E and EVE hiding from the security bots on board the Axiom and when WALL-E felt like he was “dumped” by EVE. The scene is cute, but it was easy to see why it was cut as extraneous.

There’s a sneak peek of “WALL-E’s Tour of the Universe”, where WALL-E, Microsoft, and the Worldwide Telescope (WWT) help explain planets, constellations, stars, and galaxies. This looks like a cool virtual tour of the universe for the computer from Microsoft Labs.

Finally on the disc, in addition to the audio commentary from director Andrew Stanton, you have a feature called “Animation Sound Design: Building Worlds from The Sound Up” where sound designer Ben Burtt talks about the challenges presented when coming up with the soundtrack for the movie. Burtt, Stanton, co-producer Lindsey Collins, and producer Jim Morris describe the process they used for finding the sounds for not only the main characters of WALL-E and EVE, but the background noise of an abandoned planet, a space ship, and more. You learn amazing facts like how a Slinky is used to create the sounds for EVE’s laser gun. You also learn how the sound producers at Disney created some of the effects for early Disney animated movies such as Dumbo and Snow White and the Seven Dwarfs. Clips of Jimmy MacDonald, a Disney sound designer, are shown where he demonstrates many of the techniques used in those films. Burtt reused some of these techniques for WALL-E.

Disc 2 continues the stream of great bonus features. The features are broken into two main categories – Humans (for film fans) and Robots, plus a Set Up menu that allows you turn on subtitles.

The “Humans” features then includes a number of sub-features… “Behind the Scenes,” “BnL Shorts,” “The Pixar Story,” and additional “Deleted Scenes.”

Each of these breaks down further into individual features. “Behind the Scenes” by itself includes nearly 52 minutes of documentary coverage of the making of the movie. Everything from lighting and music, to how the look of humans evolved, to the Pixar process and how the robots were designed. These are definitely geared for those individuals interested in how the film came together and not for your typical family audience.

“BnL Shorts” is a collection of five short movies that are basically commercials for “Buy n’ Large” narrated by Fred Willard. These are hilarious clips lampooning our commercial, advertising-laden world of today and extrapolating a bit to fit the world of WALL-E.

“The Pixar Story” is a history not only of Pixar, but of animation and film. For the last 100 years, we’ve been seeing images dancing on the screen in black and white and color. Stop motion, hand-drawn cartoons, and CGI all have their place in such history. And Pixar has been involved in this history for the last 20 of those 100 years. Leslie Iwerks created this 90 minute story of how Pixar revolutionized the animation industry.

The addtional deleted scenes on Disc 3 are of sketch-book style animated sequences. The first, “Secret Files”, shows what I believe is the auto-pilot disappearing into the bowels of the ship to discover that with the plant from Earth, return was imminent. The auto-pilot determines that going back to Earth should be avoided at all costs. “Docking” provides a slightly different approach to WALL-E’s arrival on the Axiom. Again, it’s obvious why some of these scenes didn’t make it into the final movie. The final scenes were simpler and more direct.

On the “Robots” side of the features, we have fun family-oriented features.

“WALL-E’s Treasures & Trinkets” is a collection of short movies that did find their way onto the web at some point before WALL-E’s release. They have WALL-E playing with rubber balls, a hula hoop, a vacuum cleaner, and more. All of these are great fun!

“Bot Files” provides a fun encyclopedia of all the various robots that were scene either directly or indirectly during the movie. This includes BURN-E, WALL-E, EVE, and many more.

And the “Lots of Bots” Storybook provides a game environment for exploring some of the various robots in the movie as well. However, this allows an enterprising person to build their own robot out of pieces on a virtual workbench. As you solve a puzzle, it reads a story in a Dr. Seuss-style of narration.

Ultimately to have this amount of extras is great. You can watch the movie and save something to explore later.

Disc 3 provides the Digital Copy for your Mac or PC. Simpy choose whether to import the copy into iTunes or Windows Media format, input the unique code (included on an insert), and then you can transfer WALL-E to your computer, iPod, iPhone, or other Windows Media device. Providing a digital copy seems to be very popular these days as a way to encourage folks not to rip DVDs to their computers, thus violating the various distribution agreements. Many of the movie companies and DVD distribution firms are going this direction.

Lastly, I have to say something about the design of the packaging. This has to be one of the most cleverly conceived cardboard packages I’ve seen lately, with pullouts that go left or right. The one that pulls out to the left holds Disc 1. On the inside of the tab protecting the disc is the track list for the movie itself. Then on the other side, the one that pulls out to the right contains Discs 2 and 3. The tab on this side simply has a few stills from the movie. But to have such storage and information available in such a simple package is an elegant solution. Kudos to Disney and Pixar for this one. It’s slim and will fit on a shelf neatly with your other DVD cases.

If you are a WALL-E fan and want lots of extras, the 3-Disc Special Edition is for you! It’s a great addition to any family DVD collection.

p.s. Be sure to pick up your copy at Amazon!