Recently released on DVD and shown on the Smithsonian Channel, Vampire Princess provides an alternate background to one of Halloween’s most celebrated citizens… Dracula! 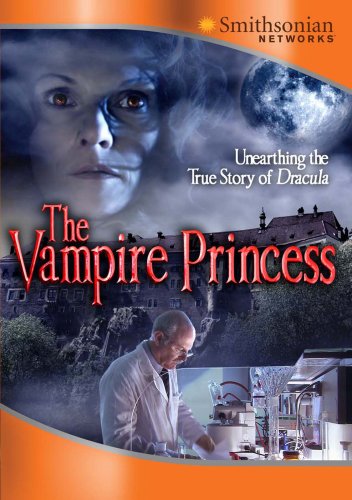 The documentary begins with an archaeological dig in the Czech Republic in the town of Cesky Krumlov near Schwarzenberg Castle. A team of archaeologists discovers a grave containing the remains of 11 people. All but three of the individuals were buried in the traditional Christian east-west position. But the other three have been buried with their bodies in a north-south position. More than that, one was found decapitated with its head between its legs, a stone between its jaws, and all limbs were pinned down by heavy rocks. As if that wasn’t enough, the body had also been staked through the heart and a rosary had been used to tie the hands together.

Rainer Koppl is a media studies professor at Vienna University who studies the origins of vampire myths. The burial with the head removed, stone between the jaws, and the limbs pinned down, is a traditional handling of someone suspected of vampirism in the 18th century. A vampire scare during that time period led to many buried bodies being desecrated in such a way.

The discovery at Cesky Krumlov was the first archaeological evidence of the widespread vampire panic in the 18th century. Staking the heart of a suspected vampire, decapitating them, and then placing the skull between the legs with a stone between the jaws, all ensured that the corpse wouldn’t be able to chew or replace the head on the neck and rise from the grave. A rosary tied the hands and heavy stones weighed down the limbs as further preventative measures. All of these procedures were documented in Bram Stoker‘s 18th century novel Dracula.

Commoners weren’t the only ones fascinated by vampires in this time period. Even scientists and officials bought into the myths. It wasn’t until late in the 18th century that the age of reason caught up with and began explaining the vampirism traits, such as bloating in the grave, fresh blood leeching to the surface, and blubbering noises made by escaping gasses.

Originally in the Dracula story from Bram Stoker, he wanted to start the novel with a vampire attack at the tomb of an Austrian princess. In the scene, Jonathan Harker approached a grave only to see the princess rise from the grave. A quote on the tomb leads to Bohemia and a poem about a woman, Lenore, grieving her husband who came back as a vampire.

Digging through the Schwarzenberg Castle archives, which stretch across 6 miles of shelves. Most of the documents haven’t been examined, but they cover centuries worth of activities in the castle. Koppl discovers records of Eleanore von Scharzenberg.

The documentary traces the path that the professor followed, tracking down information about this real 18th century bohemian princess named Eleonore von Scharzenberg who was suspected of vampirism. She died in 1741, wasted and pale from a mysterious illness and with very unusual behavior before her death.

Eleanore was a big hunter at the time, but wolves, which were shot on sight in most places, were on her “do not shoot” list. She raised wolves and drank their milk as a way to enhance her fertility, as she had been unable to have a child during her marriage as an heir. At age 41, she gave birth to a son — it had been worth the risk, even though it was considered either a miracle or witchcraft. Wolves were associated with the devil and evil, so even though Eleanore did eventually bear a son, the howls from the castle as the wolves were milked ensured that the princess wasn’t helping her image among the people.

After her husband’s death in a hunting accident, she began suffering from an unknown affliction. She used all sorts of odd, expensive homeopathic remedies and occult practices to try and manage her pain. Many of the odd treatments used were fanciful medications, such as crayfish eyes and unicorn horn, which were all early homeopathic remedies and magical potions. These obsessions must have further damaged her reputation among the nobility.

It’s thought, based on written evidence, that she suffered from porphyria, which gave her the appearance of a vampire. She was extremely sensitive to light, giving her a pale, shrunken appearance. And as if that painful affliction wasn’t enough – during the autopsy after her death, she may have also had a large tumor in her abdomen.

Though the family crypt was in Vienna, she had her body interred back in Cesky Kumlov at the church. Her burial place was discovered inside the church, under a heavy tombstone and under a layer of concrete.

Were these burial precautions because she too wondered about vampirism? Was this woman the origin of the vampire myths? Did she inspire Bram Stoker?

It’s a very intriguing documentary, with a great deal of information and historical re-enactment. Narrated by Brad Abelle, this 52 minute film is an informative work from the Smithsonian Channel just in time for Halloween. Though there really were no extras on the DVD, it has some promos for other Smithsonian series that look very intriguing.

Check Vampire Princess out on the Smithsonian Channel or on DVD!