Let’s start by saying I’m a jaded horror movie watcher. I prefer plot and story to thrills, special effects to blood and gore, and strong themes to strong screams. I tend to find horror movies funny rather than scary. However, when the trailers for The Unborn (2009) began airing on television before its release, I have to say they made me curious about the film. 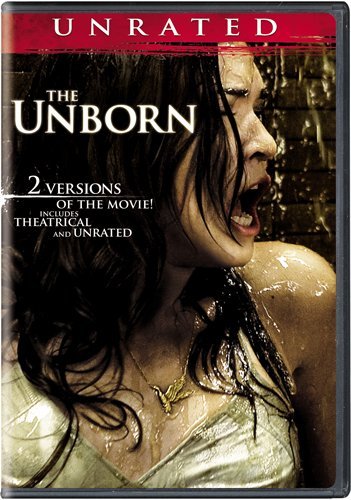 David S. Goyer has been involved with a number of my recent favorite movies as a writer or director, including The Dark Knight and Batman Begins as well as the Blade trilogy. And Gary Oldman has been in some of my favorite movies, including The Fifth Element, Bram Stoker’s Dracula, and The Professional as well as the recent Batman movies. He typically plays crazy characters well, but has been more subdued in recent roles.

So I thought The Unborn looked like a winner — a great writer, a great actor, and apparent homages (at least from the trailers) to The Exorcist and The Omen. I never saw the film in the theater, but I added it to my list of movies to check out when it got to DVD.

At a very high level, The Unborn boils down to a simple formula. Twins + Nazi Occult Experiments + Dybbuk = The Unborn. And I think if they’d stuck to that formula, this might have been an ok movie. As it turned out however, it peters out about 2/3 of the way through. The first hour builds the suspense just fine, with a few scares thrown in for good measure.

Casey Beldon’s (Odette Yustman looking a lot like Megan Fox) life begins to unravel as she starts seeing, hearing, and experiencing strange visions of a creepy young boy. As we learn more, we find out that her mother, Janet (Carla Gugino), killed herself when Casey was young. Casey lives with her father (James Remar), who really only appears in perhaps 3 scenes and is evidently away on business more often than not, leaving Casey at home to fend for herself against the forces of evil.

As the film progresses, we learn that while in her mother’s womb, Casey had a twin who was strangled by an umbilical cord. This comes to light after the color of one of her eyes begins to change, which is ostensibly a symptom of a genetic condition that often aflicts twins.

And we meet Casey’s grandmother (Jane Alexander as Sofi Kozma), whom Casey had never met before. Granny was a prisoner at Auschwitz during World War II, and was the subject of strange Nazi occult science experiments along with her brother. As a consequence of those experiments, her brother died, but came back as a dybbuk, an evil spirit who was merely inhabiting her brother’s body. Granny tells Casey to find Rabbi Sendak (Gary Oldman), who might be able to perform a Jewish exorcism to get rid of the evil spirit that’s now plagued the family through three generations.

All along the way (as you might expect in a horror movie about evil spirits), poor Casey sees things, hallucinates, and generally has a bad time of things.

It’s about an hour into the picture when things go weird for me. Rabbi Sendak enlists the aid of Arthur Wyndham (Idris Elba), a Christian priest who has done research into exorcisms. When Wyndham meets Casey and her boyfriend Mark (Cam Gigandet), he asks for their ids and signatures on a legal consent form. After all the other weird things experienced by Casey and Mark, the Rabbi, Casey’s grandmother, and the nearly 100 cops and other officials at the many crime scenes throughout the film, why are they asking for id now? Just in case something goes wrong… Yeah, right.

Once they sign the paperwork, it’s as though the dybbuk sees an opportunity to pretty much kill everyone it encounters in bizarre, violent ways. And at the end, well I won’t spoil it. But at the end they finally return to the spooky formula that might have worked if they’d stuck with it all the way through.

The Unborn isn’t a bad horror movie. There were a few good startles here and there, the evil was suitably evil, and the creatures suitably creepy. But I felt as though all the actors over 25 might have been sleepwalking through their parts. Oldman even looked bored through a few of the “scary” parts.

I watched the “Unrated” version of the film, which adds one minute to the running time of the film. I wasn’t able to determine which scenes were added, but I suspect that they added a few extra shots of Yustman’s young, scantily clad body. There’s little nudity in the film, and it was handled respectfully. But there can’t have been much else added in that extra minute. Both versions, the theatrical and the unrated, are on the DVD for your viewing pleasure.

Beyond the theatrical and unrated versions of the film, the only extras are a few trailers and a number of deleted scenes. None of the deleted scenes really added much to the movie, so I don’t think you’ll miss much there.

Overall, The Unborn was just ok. If you’re looking for a horror movie about evil spirits, possession, and exorcisms – I’d have to tell you to go to the classics like The Exorcist and The Omen. Even now after all these years, those are still the baseline for a good movie in this genre. Check them out at your local rental store or favorite retailer, but unless you need to see more of Yustman’s rear end I’d skip this one. (For a different take on The Unborn, check out Luigi Bastardo’s review of the Blu-ray version here.)

p.s. Click below to pick up The Unborn and other films at Amazon: