In 2008, we read The Tale of Despereaux by Kate DiCamillo with our daughters as a bedtime story. In this fairy tale, Despereaux is a small mouse with big ears and a bigger heart who finds himself in the midst of an adventure involving a princess, a rat, and a kitchen girl. It was recommended to us after we read The Miraculous Journey of Edward Tulane, also from DiCamillo.

The story wove a compelling tale of love and loss, family, honor, and betrayal. So when we heard that they were turning it into a movie, we were all very excited and wanted to see what they’d do with it. And when we saw The Tale of Despereaux at the theater, we loved it. 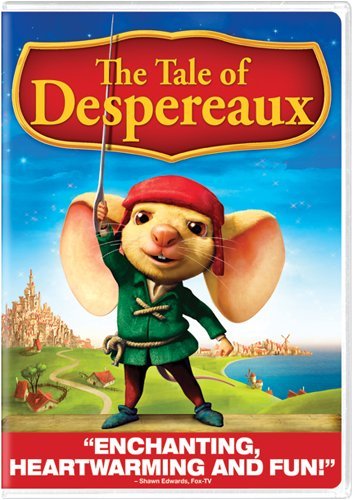 But here’s the thing about the movie. It’s not the book. Or rather, it’s the book with a more streamlined plot and changes here and there to make it more fitting for the screen. So if you’re expecting a page for page faithful adaptation of the book, you’ll be disappointed.

That said, it’s still a powerful movie about a small mouse with big ears and a bigger heart who finds adventure in the Castle of the Kingdom of Dor. And the DVD presents it beautifully. We were able to fall in love with Despereaux, Roscuro, and Miggery Sow all over again.

What caught me off guard the first time we saw the movie were the changes that made the various plots and characters fit seamlessly into a single thread. In the book, the story was segmented much more and you had to keep the three main plots straight. You were first introduced to the mouse Despereaux, and his family. Then you were introduced to Chiaroscuro (or simply Roscuro), the rat. And then you were introduced to Miggery Sow, the poor girl from the country of the Kingdom of Dor. Woven through these were the stories of the Princess and the King and Queen, and of how soup was outlawed in Dor after the Queen died of fright at the sight of the rat Roscuro.

I’m not knocking the book at all. We really enjoyed it. But it was meant to be read, not written directly for the screen. So when Gary Ross began to take the story and rework it for the film, it had to be streamlined a bit. And to make the transitions less clunky, we had the characters of Andre (the chef) and Boldo (the Spirit of the Soup) added, who were not in the book.

So the transition from novel to screen was interesting for me. As I said, we really enjoyed both techniques for telling the story as a book and as a film.

In addition, the voice cast for The Tale of Despereaux was fantastic. With Matthew Broderick as Despereaux, Dustin Hoffman as Princess Pea, and Tracey Ullman as Miggery Sow, they started with an amazing core of players. Then you add Emma Watson (Hermione Granger from the Harry Potter movies) as Princess Pea, Kevin Kline as Andre, and Stanley Tucci as Boldo as the next wave of voice actors. And then the list goes on… Robbie Coltrane as Gregory, Tony Hale as Furlough, Frank Langella as the Mayor, Christopher Lloyd, as Hovis, Bronson Pinchot as the Town Crier, and Sigourney Weaver as the Narrator… This was a dream cast.

Add to that the absolutely gorgeous artwork, both as backgrounds and set pieces as well as the gorgeous stylized 3D rendering of the characters and the world. And you have an animated feature that is almost as much art as the story. It was interesting to compare The Tale of Despereaux to some of the other features coming out last year. When you compared this movie to Dr. Seuss’ Horton Hears a Who! or Kung Fu Panda or WALL*E, it stands out because of the way the artists chose to design everything. Whereas those others were done to be photo-realistic, or styled in a Dr. Seussian manner, etc., the feel of Despereaux harkens back to the early years of Disney features like Snow White and the Seven Dwarves or Sleeping Beauty merged with modern technology.

All of these elements came together to create a magnificent animated feature that will be played again and again at my house for the indefinite future.

In addition to the movie on the DVD, you also get a number of extra features.

We were amazed to see the more than 10 minute clip from Curious George 2: Follow That Monkey! among the bonus features. This was the longest sneak peek I’ve ever seen on a DVD, and definitely made my family add it to the list of movies to watch for on DVD this Fall. Like the first Curious George feature back in 2006, this one captures the spirit of that loveable monkey.

“The Tale of the Tale of Despereaux” allowed DiCamillo, the writers, designers, animators, and so on, a chance to talk about many of the different design choices made for the film. The most interesting of these for me was where they got the idea for the stylized drawing style of the characters and backgrounds. They used paintings from Vermeer, Brueghel, and Hieronymus Bosch to bring this fairy tale, medieval world to life. Also, it was great to see the voice actors playing together, especially Kline and Tucci as Andre and Boldo. They looked like they were having a grand time as those characters! The care that the actors, designers, and everyone else associated with the film approached the project was easily seen in the final product.

The “Interactive Map of the Kingdom of Dor” allows you to explore Dor with your DVD remote a bit. But the “Top Ten Uses for Oversized Ears” was a bit disappointing. I was hoping for a more lively feature and instead was presented with a static list with a picture for each item.

In addition, there were two DVD games aimed mostly at children – “Despereaux’s Quest Game” is a pattern matching game where you are presented with different parts of Despereaux’ escape from the dungeon to save the Princess Pea and have to match things up to the selected choices; and the “Build-a-Boldo Game” enables you to formulate the correct recipe to make Boldo, the Spirit of the Soup, rise out of the pot to help Andre.

Overall, The Tale of Despereaux was one of my favorite stories and movies of 2008 and one I think we’ll be enjoying at my house for many years to come. We give it a solid 4 out of 4 stars. I would highly recommend it to anyone with children (or adults) who appreciate a good fairy tale. Be sure to read the book as well!

p.s. Pick up The Tale of Despereaux on DVD starting April 7, and be sure to look for the book as well!

p.p.s. If you’re looking for another great book from DiCamillo, be sure to check out The Miraculous Journey of Edward Tulane!