In August 2008, Brendan Fraser and Rob Cohen brought the latest chapter of The Mummy franchise to the big screen with The Mummy: Tomb of the Dragon Emperor. Instead of heading back to Egypt, Rob Cohen and Stephen Sommers have set the picture in China. This time Rick O’Connell (Fraser), Evie O’Connell (this time played by Maria Bello), and their son Alex (played by Luke Ford) and his Uncle Jonathan (Evie’s brother, played by John Hannah), are thrust into the mid 1940s where an ancient, cursed Emperor (Jet Li) comes back to life to reclaim his empire. (You can read my original review here.) 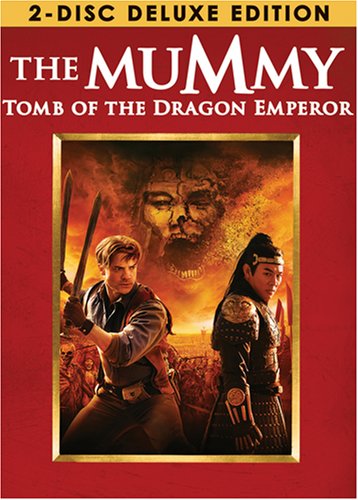 Along the way, we meet Zi Juan (the always amazing Michelle Yeoh) and her daughter Lin (Isabella Leong), and the Emperor’s right hand man and Zi Juan’s lover, General Ming (played by Russell Wong). And if the amazing cast wasn’t enough, we’re thrust into a world where the Terra Cotta Warriors of Xi’an come to life to serve their ancient Emperor and retake their world.

Though the script wasn’t great, it did have a number of fun things about it. I really liked the Yeti guardians of Shangri-la and the special effects were amazing, as you would expect in a film in The Mummy franchise. Be sure to watch to see if the Yeti score a field goal during the battle near Shangri-La!

Unfortunately, though I like Maria Bello and think she’s an excellent actress, she was given the impossible task of replacing Rachel Weisz in the role of Evie. Somehow it just never worked for me, though Bello did give it her all.

And ultimately for me it comes down to the fact that Emperor Han (played by the always amazing Jet Li) was a cursed Terra Cotta Emperor, not really a mummy. This is a sticking point for me. There are hints at the end of the movie that there may be another Mummy movie that leads us to Peru, where actual mummified remains were found. So hopefully if there is another one (and after the success of Tomb of the Dragon Emperor it’s most likely going to occur), they’ll actually go with mummies again.

The 2-Disc Deluxe Edition of The Mummy: Tomb of the Dragon Emperor includes a ton of great extras that really show the care and work that went into the movie. 89 days of shooting in Montreal and China was quite a monumental process, involving the creation of enormous sets and elaborate costumes, as well as detailed and amazingly rendered special effects.

Disc 1 includes the movie as well as a Digital Copy of the film (instructions are included on the inside of the DVD case), feature commentary with Director Rob Cohen, and a number of Deleted and Extended Scenes.

Of the Deleted and Extended Scenes, I have to say I’m puzzled as to why some of these didn’t make it into the finished film.

Disc 2 has all the juicy extras in this 2-DVD set.

If you’re a fan of The Mummy franchise, this 2-Disc Deluxe Edition DVD set of The Mummy: Tomb of the Dragon Emperor is a must have for your collection! Even if you didn’t like the film all that much (like I didn’t), the extras are worth it.

p.s. Pick up The Mummy: Tomb of the Dragon Emperor at Amazon!