There have been a variety of movies about soldiers coming home from the wars in Afghanistan and Iraq in the last few years. In the Valley of Elah was one in 2007 starring Tommy Lee Jones and Charlize Theron. Stop-Loss came out last year starring Ryan Phillippe and Joseph Gordon-Levitt. And then there was The Lucky Ones in September 2008. The Lucky Ones just came out on video a few days ago and stars Rachel McAdams, Tim Robbins, and Michael Peña as three soldiers on leave who take an unexpected road trip across the United States. And this is definitely not your usual war movie, soldier homecoming movie, or road trip movie. It almost effortlessly blends a trio of intriguing characters coming “home” to find that things aren’t how they hoped.

As TK Poole, Peña plays a cocky, self assured sergeant coming back to the US to visit his fiancée. McAdams plays private Colee Dunn, delivering the guitar of a friend who didn’t make it back to his family. And Robbins plays sergeant Fred Cheever, a man returning home to his family and retiring from the military.

Each of these characters has depth, and a unique perspective on the world. I found Colee to be the glue holding them together. TK and Cheever have their own insecurities and Colee’s innocent demeanor kept the serious scenes from becoming too overwrought, while keeping the trip going. 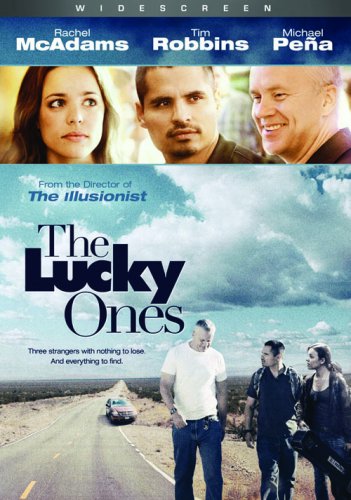 There were a couple of fun things that kept happening… One was whenever the group would thank someone, you’d hear them reply “No, thank you!” And the other was Colee’s fascination with wanting to play tourist as they headed across the country. Eventually they did stop for a picnic in the Rocky Mountains of Colorado, but only to stop her from crying.

Each character brought their own biases to the world, but even more than that the world’s biases were ever present. Each time they interacted with a group of people… A group of clueless college students, politically-minded yet clueless people in the midwest, or even police officers… It was almost as though you could see their biases line up for or against the soldiers.

I’d like to think that the United States respects the efforts of its military more than I saw in this film, but I know that would be naive. We live in a culture where individuals, no matter their social cliques, have their own perceptions of reality. And far too often we dismiss others perspectives simply because they don’t jive with our own preconceived notions of how the universe works.

The end result is a poignant movie that not only entertains, but hopefully educates and makes us more aware of our own predispositions towards the war in Iraq (which is artfully never mentioned during the entirety of the film). Sometimes it’s good to make us see with someone else’s eyes for a change.

Director Neil Burger did a masterful job of never letting the movie bog down as we took this road trip with the soldiers. And even though we don’t necessarily end up where I might have liked, I thought the characters changed enough to warrant traveling full circle. I know I enjoyed the ride.

In addition to the movie, there’s also a featurette called “A Look Inside The Lucky Ones” which allowed the actors and director to speak about some of the aspects of the story or their characters. I was intrigued by McAdams talking about her character Colee and how she wasn’t quite sure how to get inside her head, but was intrigued by the prospect.

I give this one a solid 4 out of 4 stars. It’s a great film that deserved more press than it received during its initial run in the theaters last year. However, that merely means that more of us can discover it now that it’s available on DVD!

Be sure to check this one out. It’s worth your time.