Is it just me or is there a swell in the number of apocalyptic and post-apocalyptic films lately? The Book of Eli, Legion, Vanishing on 7th Street, Battle: Los Angeles, Zombieland… And those are just the ones off the top of my head going back to 2009. 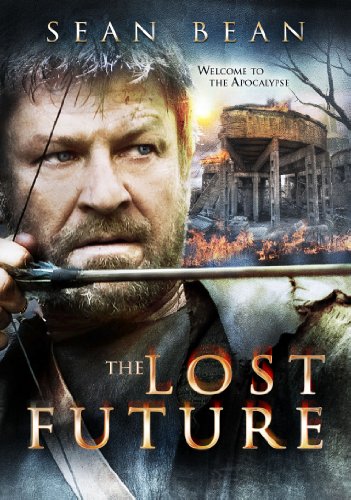 Add one more to the list – The Lost Future. This made-for-tv film aired on Syfy this year starring Sean Bean (The Lord of the Rings: The Fellowship of the Ring, National Treasure, Game of Thrones, Percy Jackson & The Olympians: The Lighting Thief, Ronin) as Amal, a man dedicated to finding a cure to the degenerative disease making men into beasts. In the realm of the usually badly-produced movies shown on Syfy, this one wasn’t too bad.

In the bleak picture painted by The Lost Future, mankind has been knocked back to stone-age technology and reduced to tribes able to find places to hide from the beasts. If you are bitten by one of the beasts, you will surely become one. And as such, tribe numbers are dwindling.

Uri (Tertius Meintjes, Crusoe, The Librarian: Return to King Solomon’s Mines) and the other Elders are doing their best to keep the Grey Rock tribe together, with strict laws on where to hunt to avoid entering lands held by beasts and exploring beyond the areas they know as safe. Unfortunately, food has become scarce in the area and Savan (Corey Sevier, Age of the Dragons, the upcoming Immortals), Uri’s son and the tribe’s best hunter, and Kaleb (Sam Claflin, Pirates of the Caribbean: On Stranger Tides, The Pillars of the Earth), the tribe’s best tracker must leave the safety of Grey Rock lands to hunt for enough meat to feed the tribe. Of course, by doing so they attract the attention of some of the beasts and the safety of Grey Rock is compromised.

The beasts attack and many tribe members find safety in a reinforced cave, but some are trapped outside in the confusion. Savan, Kaleb, and Savan’s girl Dorel (Annabelle Wallis, The Tudors, Pan Am) are left hiding in the trees from the monsters. That’s where Amal saves the day, using a bow and arrow to take out a beast who almost gets them. He escorts the trio to where he and his wife Neenah (Jessica Haines,The Prisoner (2009)) and his son Persk (Sam Schein) have been living between a couple of rivers, which the beasts will not cross.

When Amal discovers that Kaleb can read and was taught by his father, a friend of Amal’s, the search is on for a mysterious medicine that prevents people from getting the beast’s disease. Will Savan and Kaleb help Amal retrieve the medicine from the leaders of a city holding it hostage or will they try to rescue the rest of their tribe? And will they succeed whichever way they choose to go?

The Lost Tribe mixes a bit of the far future of H.G. Wells’ The Time Machine and Mark Twain’s The Adventures of Tom Sawyer with modern fears of biological warfare and disease transmission to create an interesting combination. It still suffers from the bane of most Syfy-produced movies with moments of bad dialog, pacing issues, and poor special-effects. But overall it does better overcoming these concerns than most recent made-for-TV movies on the channel (except for Age of Dragons which was actually pretty good).

The DVD also includes a trailer for the film and a collection of “Making Of” featurettes that include interviews with cast and crew as well as behind the scenes footage of set building, stunts, costumes, and visual effects. For a made-for-TV film, there’s actually quite a bit of meat in the “Making of” segments. My favorite segment actually focused on the production meetings and discussions about how nature would reclaim the world without a large population in a post-apocalyptic setting.