About once a year or every other year, we see a football movie on the big screen. 2008 was no different. The Weinsteins brought us The Longshots, which stars Ice Cube as Curtis Plummer, an unemployed mill worker in the small town of Minden, Illinois. Curtis is the uncle to Jasmine (played by Keke Plummer, recently in Akeelah and the Bee). Jasmine and her mom, Claire (Tasha Smith) were abandoned by Curtis’ brother several years prior to the beginning of the film.

Jasmine has a hard time fitting in at school and instead of making friends and doing things at school, prefers to bury her nose in a book. Her mom, Claire, is concerned about Jasmine, and asks Uncle Curtis to watch her in the afternoons while Claire works a late shift at the diner. So Jasmine and Curtis get to know each other a bit and they come to find that the girl has a gift for throwing a football.

Curtis, who knows the coaches of the school football team (the Minden Browns), gets Jasmine to try out for the team and the rest is history. 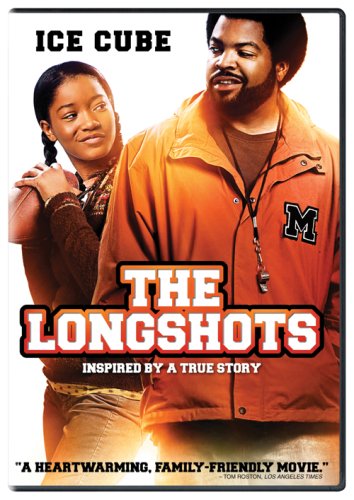 Based on the story of the real Jasmine Plummer, it’s inspirational to girls who want to do more with their lives. Why can’t girls play football? It shook things up in Minden enough to get into the history books. Jasmine was the first female to play in a Pop Warner football tourney in its 56-year history.

The DVD for The Longshots also includes a number of special features.

Included in the “Deleted Scenes” are seven scenes that didn’t make the cut. Most of them would have distracted viewers from the main story and it’s pretty obvious why they weren’t in the finished film. Like most deleted scenes, they all have a purpose in the story, but that purpose may not contribute to the film as a whole.

“Jasmine Plummer: The Real Longshot” provides a great glimpse into the real Jasmine Plummer the movie is based on. Though she had to stop playing football because the boys were getting big and she didn’t, so could have been hurt severely, she’s now playing basketball and continues to be an amazing athlete. She hopes to go into the WNBA, which is a great goal. She’s proven time and again that she can compete, but still be a girl.

“Making the Movie” talked about the various actors in the movie. Keke Palmer, playing Jasmine Plummer, actually turned out to be quite an athlete. Tasha Smith, Ice Cube, and Keke Palmer all get a chance to talk about each other. It seemed to be a very supportive cast and crew behind the film and do the real story justice. And all of the cast members seemed to respect and believe in Fred Durst as the director, which gives the movie that much more heart. He had a passion for the story and it shows.

“A Conversation With Ice Cube” gives viewers a great idea of how he came to be a part of this movie. Once again, you can really see the passion for his work, the story, cast, and crew.

“A Conversation With Director Fred Durst” introduces the viewer to this actor/director/musician helming The Longshots for the Weinsteins. He talks about the heart of this inspiring story and wanting to do it right and has a great deal of respect for his actors.

Though it didn’t get a great deal of love at the theater, we found this movie to be great as a family flick. It has a little bit for everyone — football, drama, heart, and kids. We give it a solid 3 out of 4 stars.

Definitely check out The Longshots on DVD at your favorite video store or on Amazon!

p.s. Check it out here at Amazon: