When I heard about a zombie movie set in Paris and produced by a French movie company, I was intrigued. Not since Anne Parillaud in Innocent Blood or Louis (Brad Pitt) and Lestat (Tom Cruise) in Interview With the Vampire do I recall anything remotely close to a horror/adventure movie in France (and Innocent Blood was set in Pittsburgh!)… 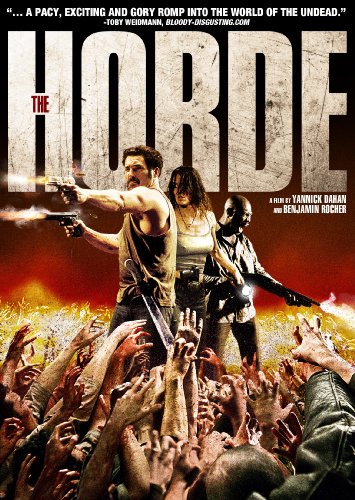 The Horde aims to rectify that situation. And I think it does a great job. It’s a throwback to an earlier kind of movie – almost a slasher flick with zombies – but breaks the mold by staying away from George A Romero‘s Night of the Living Dead stereotypes. These are not your everyday zombies. And though they probably enjoy a glass of red wine with dinner, I think they enjoy their meat really bloody.

The film begins with the death and funeral of a police officer. The remaining members of his unit want revenge against the criminals who killed him. But as the film progresses, we see there is more going on between this tight-knit “family” of police officers. That seed of mistrust motivates one of them to follow through to the bitter end in their quest for revenge regardless for the consequences.

Things start going wrong for the four remaining members as soon as they try to strike back at the people responsible. The criminal gang is better prepared than they are, which causes more than a few issues. But of course, everything changes when a zombie arrives at the door and starts eating people.

Can the cops and the criminals get it together and fight as a single unit to survive? Or will their infighting divide and conquer from within, making it even easier for the zombies to get to their prey?

Even with English subtitles and a ton of foul language coming from the mouths of the main characters, this film works and works very well.

There are a few things I absolutely loved about this film.

First, there’s the zombies themselves. These are not your typical slow, plodding, stupid zombies. Instead, they are fast, vicious, and show almost a hive mentality as they seek fresh meat.

Second, the “survivors” themselves. This ragtag band of survivors starts out with three cops and three criminals that get attacked and snacked on for the remainder of the film. Aurore (Claude Perron, Amelie), made me think of Sigourney Weaver as Ripley in Alien – a no-nonsense kind of gal ready to take everybody on at once. Jean-Pierre Martins (La Vie en Rose) plays the tough cop Ouessem who ultimately sacrifices himself so the surviving members of the team might survive. And when Yves Pignot joins them later as the insane war veteran René, I had to giggle. He’s so far over the top that he pushed this from an average zombie flick to an awesome one.

Lastly, Ouessem’s swan song at the end just screams “hero” as he stands on top of a car in a parking garage, zombies surrounding him. I wouldn’t have been surprised if he’d pulled a sword out of somewhere and waved it above his head like a warrior from Braveheart or even Army of Darkness. Instead, he uses his pistol and machete to take out as many as he can before they outnumber and overwhelm him…

This is a hell of a feature debut from co-directors Yannick Dahan and Benjamin Rocher. I look forward to seeing what’s next from this dynamic duo.

In addition to the movie there are many cool extras on the DVD, starting with an alternate beginning to the film which clarifies many of the trust issues between the cops. I definitely recommend you start there AFTER watching the film all the way through. And the short film “RIVOALLAN” paves the way for the film as well, showing what happened to the cops’ comrade in arms prior to the funeral at the film’s opening.

What I always love however are the “Making of” features, and The Horde doesn’t disappoint. Even with subtitles, the joy with which the cast and crew approached this film was very evident. Hundreds of extras from around the area where they filmed as well as the online call for extras, which yielded 3000 entries of which they could only take 300, proves that there was a hunger for some sort of zombie horror film in the French market. Talk about a logistical nightmare! But these guys pulled it off in an area that had evidently not been kind to film production in the past, with looting, fires, and property destruction on other films done in the area.

And lastly I have to mention the art features – “Drawing Studies – For the Zombies and Sets,” “Poster Projects,” and “Storyboard Extracts.” All of these offered glimpses into the pre-production and planning that goes into a film of this scope and magnitude. I love seeing the early drawings as compared to the finished product and how the two diverge through the production process. Amazing drawings though that provided plenty of background for set designers and crew to put something together in the real world to match.

If you like zombie movies and are looking for something a little different, be sure to check out The Horde on DVD. Who knew there were zombies in France? Sure, they seem to be everywhere these days, but it’s nice to see that the United States is sharing the undead with the rest of the world!

p.s. Pick up this DVD and others below!