It’s been a long time since I watched a movie where every time I thought the action had peaked, it managed to one-up itself again. How director Kim Ji-woon managed to hold The Good, The Bad, The Weird together is beyond me. Somehow he blended spaghetti Westerns, classic war movies, chase scenes, horses, explosions, and some Quentin Tarantino attitude into a story that survives mostly intact from beginning to end. 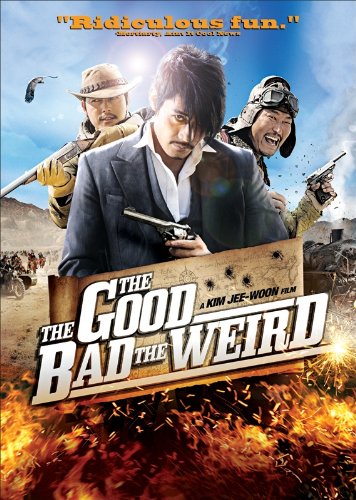 At its core, The Good, The Bad, The Weird is about three men and a map. 1930s Manchuria in Ji-woon’s view is quite reminiscent of the Wild West of the late 1800s. Outlaws, natives, and armies are all fighting for land and resources to call their own. A treasure map is being sold to the Japanese, only to be stolen back after the transaction takes place on a train… Unfortunately, the train is being robbed by “The Weird” – Yoon Tae-goo (Kang-ho Song, The Host, The Thirst).

When Tae-goo robs the train, he stumbles into the car with the Japanese banker and robs them at gunpoint. As this is happening, “The Bad” – Park Chang-yi (Byung-hun Lee, G.I. Joe: The Rise of Cobra) and his gang are stopping the train and getting everyone off so they can get the map themselves. Unfortunately, the sudden stop causes Tae-goo to kill everyone he is robbing. While he’s trying to escape the train with his newfound wealth, “The Good” – bounty hunter Park Do-won (Woo-sung Jung) and Chang-yi get into a gun battle.

The rest of the film is one long chase sequence. Tae-goo is chased and caught by Do-won and the two of them are chased by Chang-yi. Though Do-won initially only wants to bring in the other two criminals, eventually he starts to be enchanted by the idea of buried treasure. Ultimately it comes down to a showdown in the desert near the treasure. Who will win?

As I said in the beginning, the whole movie is a series of scenes “one-upping” each other. We go from trains and motorcycles to horses, Jeeps, and artillery. Near the finale, there is an amazing scene where you see an entire field of men on horseback chasing Tae-goo on a motorcycle. Of course, that’s right before the Japanese army starts launching explosives into the fray…

Is this a perfect movie? Not really. Was it fun? Heck yes!

Though I found at least one continuity issue where Tae-goo leaves a brothel in the desert with a group of rescued kids all together on his motorcycle in one scene and then a couple of scenes later the kids are gone and Tae-goo is alone… It didn’t really detract from the frenetic action of the 130 minute film.

The Good, The Bad, The Weird wants to be a Western, but its Asian roots are what makes this movie work. Sure there are horses, train robberies, and lots of gun battles – but the presentation, stunts, and wire work are definitely from the world of martial arts movies.

Beyond that, it’s non-stop action from the train robbery to the gunfight at the end and the subtitles never got in the way for me. I absolutely love Kang-ho Song. He has an amazing gift for portraying both the hapless hero and the knowing villain. Playing the simpleminded father in The Host trying to save his daughter, there was an “everyman” quality that really appealed to me. His portrayal of Tae-goo as a gleeful bandit seeking enough money to retire to a simple farmer’s life has that same quality.

There are several extras on the DVD, including some highlight reels, interviews, and behind-the-scenes footage. Of all the extras, it’s the “Making Of” features #1 and #2 that were the most fun. The chaos involved with the production was absolutely massive. How they could keep on track, filming on location in a Chinese desert with all the horses, people, and explosions is beyond me.

The Good, The Bad, The Weird was quite popular at several of the major film festivals around the world. It debuted (partially unfinished) at Cannes, was an official selection at the Telluride Film Festival, an audience award winner at Fantastic Fest, and won Best Director and Best Visual Effects at the Sitges International Film Festival … It’s also managed to make more than $44 million worldwide since its release in April 2010. Not bad for one of the most expensive films (with a budget of about $10 million according to Box Office Mojo) ever made in South Korea.

If you don’t mind subtitles and you’re looking for something fun, Asian, and Western, I’d heartily recommend that you check out The Good, The Bad, The Weird. It’s a ton of fun!