Something lies beneath the desert and Mack’s (Cuba Gooding Jr.) team of elite soldiers must defeat it. But what exactly did Wesley’s (Ron Perlman) team of scientists and priests uncover? And will anyone survive?

The Devil’s Tomb is one part horror thriller, one part religious cautionary tale, and one part zombie flick. Throw in some gunfire and explosions and you have a bizarre mix of genres that in this case don’t quite work together. This movie falls squarely into C-movie territory, so why did a good cast agree to making it? 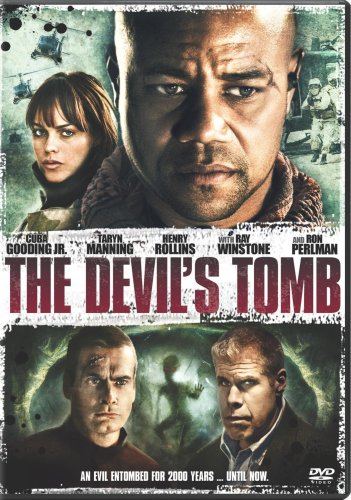 As far as the story goes, a long time ago a group of angels fell and caused trouble among the natives on Earth. A vengeful God imprisoned them in the ground to avoid further issues. Step forward 2,000 years to a group of priests dedicated to destroying these angels so there is no chance the evil will escape and cause world devastation.

Is the second group more successful than the first? Nope. They do meet Wesley and Father Fulton (Henry Rollins) down below and do their best to meet the enemy. But they definitely run into a few problems along the way.

The movie raises several interesting questions for me:

1) How much does fake blood and guts cost? I think this film went way over budget in this area.

2) How do you get from “angel” to “communicable disease” as far as a plot goes? The people who sinned in some way prior to arrival contracted a strange madness and boils, then threw up on other people to spread it around. Bizarre.

3) And finally, what did they offer Cuba Gooding Jr. to do this movie? He’s won an Academy Award for heaven’s sake!

If you’re bored and interested in religious-themed movies with a zombie-like plot, I’d encourage you to rent The Devil’s Tomb at your local video store. However, there are many better movies with these themes available. Check out Fallen with Denzel Washington or 28 Days Later as a couple of examples.

In addition to the movie itself, the DVD features a number of extras, including a commentary track with director Jason Connery and Gooding Jr.

Six alternate versions of a number of scenes in the film are provided, including Mack’s flashback, the initial meeting between different version of the beginning of Mack’s flashback, Dr. Cardell’s initial meeting with the team, and others. None of the variants added much to the scenes that made the final cut, though “Mack’s Flashback #2” added a kid to the flashback scene which made very little sense to me. It might have been that the kid was trying to control Mack to make him shoot his commanding officer, Blakely (Ray Winstone), but it was unclear.

Also included were a number of outtakes and a feature – “Beneath the Desert: Behind the Scenes of The Devil’s Tomb“. The outtakes were mainly of actors banging their heads on low-hanging pipes, forgetting their lines, dropping things, etc., so nothing really funny in my book. The feature provided a forum for screenwriter Keith Kjornes and director Jason Connery, and the cast to discuss how the story came to life and how the film took shape. They all seemed to have a good time filming the movie.

Ultimately, The Devil’s Rejects might fill a lazy Saturday afternoon. I can only give it 1 out of 4 for a few scenes that made me chuckle. But if you’re looking for a good horror film, I’d look elsewhere.

p.s. If you really want to see it, I’d rent The Devil’s Tomb, but if you must pick it up, it’s available at Amazon: