Let me tell you a little story…

In 1992, at a science fiction convention in Denver, Colorado, I had my first glimpse of Batman: The Animated Series. That night we watched footage from “On Leathery Wings,” which focused on a battle between Batman and the Man-Bat in Gotham City. From that point on, I was addicted to the DC Animated Universe as produced by Warner Brothers Animation. Over the next few years, I watched Superman: The Animated Series, Batman Beyond, Static Shock, Justice League, and Justice League Unlimited. 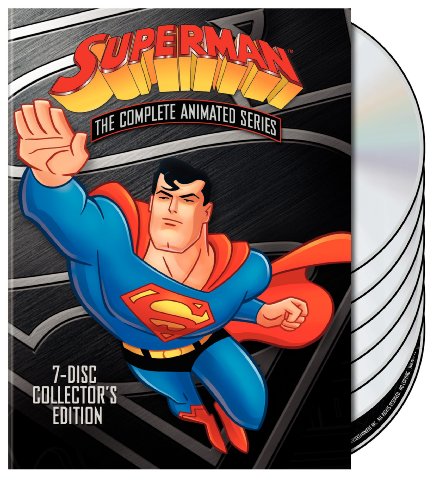 Each of these series proved not only that a cartoon could be more adult in nature and still appeal to kids, but that it could deal with more serious themes of love and loss, dedication, sacrifice, and justice. No longer were these kiddie cartoons, but something deeper.

So when Superman: The Complete Animated Series was released in November 2009, I was very excited to see it – spread across a 7-disc collection, all 54 episodes plus commentaries, making-of features, trivia, and more. Not only could I see these episodes again, but I could show them to my daughters and share these great stories with a new generation of animation lovers.

Starting with the destruction of Krypton and Kal-El’s parents sending their only child to an unknown life on a distant planet, the series begins with a bang. I hadn’t seen the original three episodes (“The Last Son of Krypton” parts 1-3) in many years and was happy to find that they were still emotionally relevant and packed a punch to start the series right.

Some of my favorite villains of all time are in these episodes – Lex Luthor, Braniac, Lobo, Darkseid, Bizarro, Mr. Mxyzptlk, and many many more. You even encounter many of the heroes like the Flash, Batman, Supergirl, Green Arrow, etc.

Since all of these series stopped airing new episodes, I have to say that the number of animated shows I still catch regularly has dropped dramatically. The style of Batman: The Animated Series and Superman: The Animated Series and all the rest hearkens back to the Max Fleischer Superman series from the 1940s mixed with modern techniques for the time. There’s something about the style that WB Animation used for all of them that can’t be matched by more modern, CGI or mixed media animation these days.

Fifty four episodes aired over the course of a bit more than three years between September 1996 and February 2000. And though they may have run out of stories from the original comic books, I probably would have continued to watch!

In addition to the episodes themselves, which I really enjoyed watching again, there are a number of extras scattered through the seven discs that really make the collection worthwhile. Creator commentaries, making-of featurettes, trivia tracks, and more are distributed across the main six discs.

For me, the feature on Disc 7 – “The Despot Darkseid: A Villain Worthy of Superman” – really shows the difficulties faced by writers trying to come up with viable villains for the hero. Darkseid is definitely a worthy villain from outside the normal Superman universe. The writers and directors involved in the animated series talk at length about Jack Kirby and the contributions he made to comic books. Darkseid brings a true evil, fascist dictator – almost an Anti-Superman – with great strength and intellect to the DC Universe. Suddenly Superman could be hurt and the whole world is in peril.

If you were a fan of Superman: The Animated Series when it originally aired in the late 1990s or have been catching it on Toon Disney, I think Superman: The Complete Animated Series is an amazing collection. Having all of these episodes in one place makes it entirely too easy to fall back into the habit of watching them after work!

p.s. Pick up Superman: The Complete Animated Series and other awesome animated titles from Amazon below: