Have you ever watched a movie and wondered “why did I just sit through this?”

Thanks to Stiletto, I have a greater appreciation for good or even “B” movies. Stiletto takes a great ensemble cast, a convoluted script with Shakespearean tragedy elements, mob movie plots, and enough violence, blood, and swearing to overwhelm the best intentioned actor, and churns them in a blender for 99 minutes. 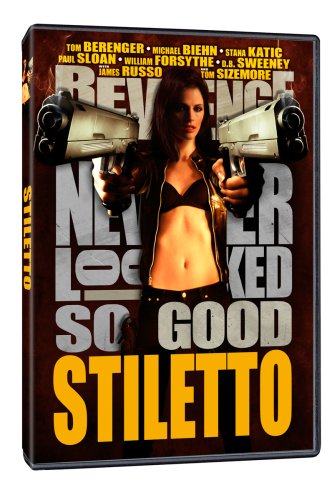 Over the course of three days I watched bits and pieces of this film until I’d seen it all, hoping that it got better. Unfortunately, it really didn’t get better.

I will say this though… The main character, Raina, played by Stana Katic, was the most consistent figure in the entire movie. Katic somehow managed to not only create a Russian woman who kills nearly everyone else in the film, but she’s doing it for a reason – vengeance is a great motivator. She has recently been in a number of movies including Quantum of Solace and The Librarian: The curse of the Judas Chalice, as well as co-starring in the upcoming series Castle with Nathan Fillion on ABC (starts March 9, 2009). And if she can be the sole beacon of light in this otherwise horrible movie, I’ll be watching Castle in a couple of weeks.

Beyond that however, the cast reads like a veritable “Who’s Who” of action and crime movies.

Tom Berenger plays crime boss Virgil Vadalos, a man at the end of his career and fighting his lieutenants for control. Berenger has looked better in other movies, including Sniper, Gettysburg, and Training Day, but it may simply have been the role. In the first 3 minutes of the film, his character is gutted — and yet somehow miraculously survives. Blood loss could explain his pallor.

Michael Biehn played Lee, Vadalos’ old right-hand man who has spent some time in Europe to take the heat for some previous crime. Biehn has been in more movies than I can count, including The Terminator, Aliens, and The Abyss. Somehow his character in this film managed to work a swear word into every other sentence.

William Forsythe plays Alex, Vadalos’ new right-hand man and the cause of all his heartache. Alex has ambition and lacks patience, which starts all the dominoes falling. Forsythe is another actor who has been in a ton of different movies, but I remember him most as “Digger” from the short-lived series John Doe on Fox TV in 2002/2003 (the titular character was played by the up and coming Dominic Purcell, who’s had a great run on Fox in Prison Break for the last few years).

Then there’s Kelly Hu as Detective Hannover, who gets a very unprofessional hole blown in her head near the end… D.B. Sweeney as Danny, who doesn’t survive 5 minutes in the film… Amanda Brooks as Penny, the psycho cockney girl with Lee who has some serious issues… Tom Sizemore as Large Bills…

Suffice it to say that Stiletto has what should have amounted to a great cast.

At its heart, Stiletto is a revenge movie. Raina’s sister comes to America to be protected by Vadalos and is nearly killed and raped by a gang of Skinheads, then thrown in the garbage. Raina is lied to by Alex, who tells her that Vadalos knew and hid the truth from her, when it was Alex who was lying the whole time and involved from the beginning. Throw in a few more gangsters, some dirty cops, and $2 million in missing money, and you have the convoluted mess that is Stiletto.

Was there anything redeeming about the film? For me, the only redeeming feature was Katic’s character. She is the glue that barely holds the whole film together. Without her, I can’t say I would have made it all the way through the movie.

In addition to the movie itself, there are no extras except for a number of previews for other movies from First Look Studios, including Way of War, Retrograde, Contract Killers, and Smoke Jumper.

Avoid this film unless you’re really, really bored. I’m giving this movie 1/2 a star. And that’s just for Katic.

p.s. If you really MUST pick it up, check it out at Amazon: