How many stone monuments do you think are in the British Isles? Any guesses? What would you say if you learned that there were nearly 1,000 stone circles in the U.K.? What if I told you that if you added the other monuments, such as stone rows, long barrows, cairns, standing stones, and so on, you’d end up with tens of thousands of monuments? 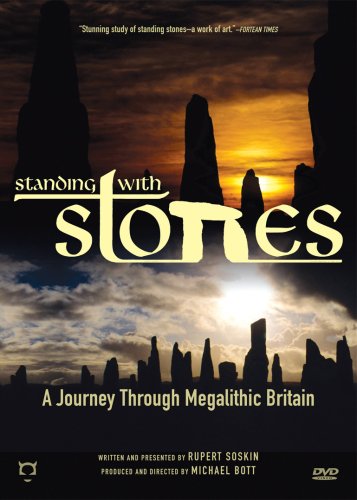 I was shocked too. The popular media has made us think that Stonehenge is the only big stone monument in the Isles, but there’s obviously much more than that.

With Standing with Stones, writer and presenter Rupert Soskin hopes to share his knowledge and fondness for these mysterious places. A renowned naturalist and writer, Soskin has been exploring the stone monuments most of his life and has a few theories to share. But even with his theories and those he relates from other archaeologists, anthropologists, and historians — we just don’t know enough about these sites to tell how they were used or why they were built.

Some of the monuments have astronomical significance, built to predict the winter and summer solstices or the position of the sun, moon, and stars. Others are remnants of objects used by the Romans to measure distance, like the London Stone which has been used to denote the center of London for measurements. But most of them are complete unknowns.

Throughout the documentary, Soskin takes viewers on a tour of more than 100 monuments scattered across England, Wales, Scotland, Ireland, and the smaller islands of the U.K. It took Soskin and documentarian Michael Bott more than two years, living in a camper-van for a month at a time, as they traveled thousands of miles recording footage.

Was the journey worth it? Definitely. Whereas nature documentaries such as Planet Earth have stunning high definition video of living creatures inhabiting the planet, Soskin and Bott somehow managed to capture the amazing natural beauty of these stone sites in a way I don’t think I’ve ever seen before. Breathtaking shots of landscapes dotted with these neolithic, bronze, or iron-age monuments left me wanting to hop on a plane and visit them myself.

And Soskin’s presentation weaves humor, humility, and intelligence together as he provides some context for these sites. It’s obvious that he has a passion for them and wants to share it. And he does a wonderful job as our congenial, informative tour guide.

That said, it’s the cinematography that sticks with me. Yes, I listened and learned quite a bit about these many sites I’d never even heard of. But the brilliant shots in daylight, fog, or even the dead of night are simply amazing.

When you add in cool computer-generated graphics of the theories discussed, including how some of the sites may have looked before the stones were removed for other purposes along with the entertaining presentation and beautiful high definition video, you have an amazing experience lasting more than two hours.

My only complaint about the DVD is the gaps between chapters of the documentary itself. I don’t know if it was my DVD player or the way the disc was made, but there were gaps of a few seconds where the picture would go black as it loaded the next chapter.

In addition to the documentary itself, you get quite a large number of extras. The “Interview” included provides a great deal of background from Soskin and Bott on the making of the film. The project has been in the works since 2001 and the duo discuss how it came to be and their goals for the film.

The “Outtakes” feature includes a number of bloopers caught while filming. Soskin, like any other narrator or actor, sometimes takes several tries before getting a line right. It’s obvious his sense of humor helps him through those rough patches.

Some “Unseen Footage” shows some of the clips cut from the film while they shot it. It was very interesting to see the camera work and how weather affected their shots.

The “Original TV Pilot Film” that was made in 2001 is included on the DVD. Originally the Soskin and Bott’s idea was for a number of short segments on television. But after they shot the first 10 minute film, they decided that it was untenable due to schedules and weather. Instead, the duo took it upon themselves to write, shoot, and edit the film.

Also included is a short trailer for the film, a slide show with 72 slides covering the making of the film, and commentary from Soskin and Bott.

If you’ve ever wanted to know more about some of the stone monument mysteries of the British Isles, Standing with Stones is a great way to learn more. In addition, the high definition video provides a beautiful way to tour parts of the U.K. without actually getting a plane ticket!

For more information about the film, be sure to check out the Standing with Stones website.

p.s. Pick up your copy of the DVD and the companion book at Amazon: