Spin City was an ABC sitcom that began in 1996 starring Michael J Fox as Deputy Mayor of New York City Mike Flaherty and Barry Bostwick as Mayor Randall Winston. Mayor Winston’s quirks require a fair amount of managing and Flaherty is there to pick up the pieces when things go weird. 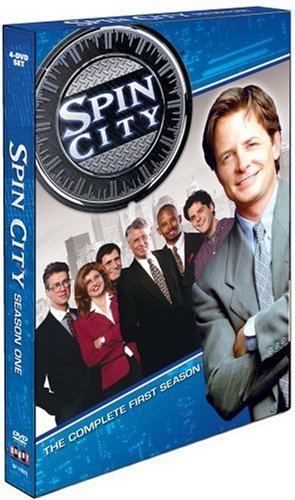 From the very first episode, the writers had everybody laughing. The actors were terrific, but without good writing even a great actor has trouble. This crew worked magic.

All 24 of the 30 minute episodes (22 minutes each without commercials) of the first season are treated lovingly and with great care. And amazingly enough, in today’s cynical political climate, the topics are still relevant. Gay rights, union workers, workplace relationships, dealing with bosses, and much much more.

Richard Kind, Alan Ruck, Michael Boatman, and Michael J Fox play off each other in every scene they’re in. The chemistry was amazing and you could tell they were all having fun.

In the 1990s when Spin City was on the air, I caught an episode now and then, but I have to admit that I didn’t really get it. Now that I see these episodes on DVD, they’re much more relevant as an adult.

Among the extras included on the DVDs are:

The interviews are very telling, as they focus on the departure of Michael J Fox from the show in 2000 because of his battle with Parkinson’s. The first couple of seasons of Spin City showed Fox in the prime of his career. And though his loss to the show was a blow to the television industry, it was a boon to Parkinson’s to have such a well known spokesman.

I believe this is the first time I’ve heard of the SHOUT! Factory, but they did a great job moving the first season of Spin City onto DVD for the first time. It’s a very clean transfer with no extra distracting artifacts as you might see from other pre-digital productions.

If you were a fan of the series when it was on the air, be sure to check it out on DVD. Spin City hasn’t lost any of its relevance over the years and still serves as an example that politics is funny!

p.s. Pick up the Spin City Season 1 DVDs at Amazon!