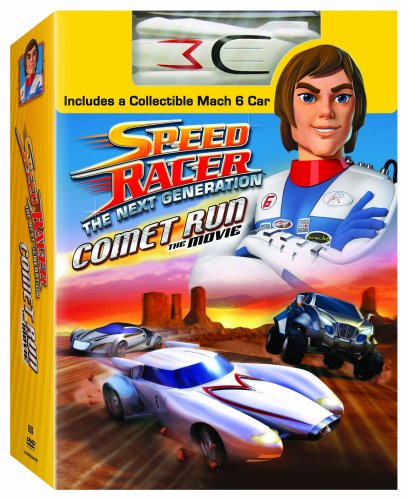 Next Generation is set in a time after the events of the original Speed Racer series (which aired in 1967). Speed Racer has disappeared, but is alive, and the Racing Academy is still teaching the next generation how to race. Speed’s son X Racer is at the top of the class until an orphan named after his father appears. And when it’s discovered that the new Speed’s skills rival his own, people began to take notice.

In the first Next Generation movie, aptly called The Beginning, the young Speed Jr. learns that he truly is the son of the legend and he begins the journey to make his long-absent father proud.

Speed Jr. is helped out by a few friends, including Conor, the team mechanic; Lucy, the team navigator; and ChimChim, a robot monkey who seems to work as both a mascot and an assistant to Conor. In Comet Run, they work together on the Mach 6 to finish a gas-less engine to revolutionize the auto industry and make racing more eco-friendly.

The new movie builds on the series and the first two movies- The Beginning and Fast Track. In Comet Run, Trillionaire Dickie Radford, a short British auto-maker with a penchant for outlandish claims (seemingly based on Richard Branson, the trillionaire leader of the Virgin empire), has revealed a revolutionary Eco-Car. Radford claims the Eco-Car will run 100s of miles on a gallon of gas. Radford is so confident in his new car that he sponsors a race. If he loses, he’ll sign his company over to the winner and walk away.

Needless to say, as with all races in the Speed Racer universe, the bad guys don’t play fair. Radford cheats. Billionaire Zile Zazic, oil baron and race fanatic, joins the race to win so he can controle Radford’s company. Zazic drives his huge new SUV and uses it to run his competition off the road. And Speed Jr., X Racer, and Zazic’s daughter Annalise race to see if they can win the prize themselves.

Is this a great series? I’m afraid not. It suffers from many of the same issues other series reboots have had, including a disconnect between the 2D animation for the non-race portions of the show and the 3D, computer-generated animation for the race bits. And though it tries to honor the spirit of the original series of the ’60s, it’s become very watered down to meet the needs of a younger audience.

That said, my daughters (ages 4 and 8) liked the movie. They were on the edge of their seats waiting to see if Speed Jr. and his friends would somehow beat the cheating and conniving Radford and Zazic.

The movie itself only lasts 66 minutes and the DVD contains no extras beyond a number of previews for other Lionsgate series. The box that contains the DVD does however include a plastic collectible Mach 6 car, which I can see burning rubber in my house for some time to come.

If you’re looking for something to entertain a youngster for a a little over an hour, Comet Run might be a good choice. But if you’re looking to recapture the magic of the original series, Next Generation doesn’t quite do it.

Speed Racer The Next Generation: Comet Run the Movie arrives on DVD on May 12, 2009. To find more information about the series, go to the Speed Racer website from Lionsgate, watch the series on Nicktoons, or look for the series on DVD at your local video store.

p.s. Pick up the Speed Racer The Next Generation Movies at your local retailer or online:

p.p.s. Or for a blast from the past, pick up the original Speed Racer series collection: