Samuel L. Jackson and Bernie Mac in a movie together? What’s not to like? When Soul Men hit the theaters back in November 2008, it was one I wanted to see. It combined two of my favorite things in life – music and comedy. Somehow I never managed to see it while it was on the big screen. 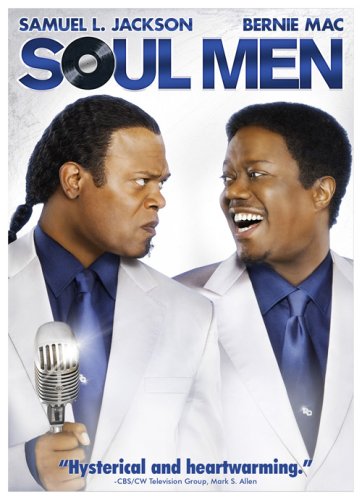 That’s now been remedied since it was released on DVD back in January 2009.

Soul Men is the story about two soul music stars from the 1970s who broke up after one album and vanished from the world of music. Originally they were a trio, and the lead singer left to pursue a very successful solo career. The two remaining members of the group were successful but couldn’t survive a confrontation over a woman both men knew and the lack of record sales.

Now 30 years later after the third member of the group passed away, the two men were asked to get together for a reunion at a performance in his honor. And even after 30 years, they still didn’t like each other.

The movie focuses on the two singers, Louis Hinds (Samuel L. Jackson) and Floyd Henderson (Bernie Mac), taking a road trip from California to the Apollo Theater in New York City, reconciling their differences, and learning a few things along the way.

We meet Cleo (played by the amazing Sharon Leal who had her big break in Dreamgirls a few years ago), who is the daughter of the woman who came between Hinds and Henderson back in the day. We meet her “gangsta” (and I use the term loosely) boyfriend Lester (played by Affion Crockett) and his “posse” of Pay-Pay (Fatso-Fasano) and Zig-Zag (Jackie Long).

Back in New York we have Danny Epstein (the always funny Sean Hayes) and Phillip (Adam Herschman) at the talent agency arranging for the performance honoring Marcus Hooks (played in clips by John Legend). Danny was funny without going over the top and fan-boy Phillip was along as comic relief during parts of the movie.

And what’s a movie about soul music legends without a few legends itself? John Legend is a great musician and singer who has a solid career going at the moment. Isaac Hayes in his last performance on screen always had an undeniable magnetic personality about him.

This is not a movie to share with anyone with sensitive ears. Though I think it’s hilarious, there’s enough blue language in this movie to turn my kids’ hair white. And there’s some nudity in spots as well, including some disturbing hilarious sex scenes with crazy woman Jennifer Coolidge. It’s definitely R-rated for a reason, so be aware of that.

That said, I loved this movie. The characters are very well defined and played to the teeth by Sam Jackson and Bernie Mac. You can tell they had a great time making the film and enjoy what they do. Losing Bernie Mac soon after this movie was filmed was a huge blow to comedy. He and Isaac Hayes will be missed.

And the music is great. They really captured the art of great soul music in the film.

On the DVD, you’ll find a ton of extras, including:

I give Soul Men a solid 3 out of 4 stars. If you like musical comedies, Soul Men is right up your alley. Be sure to check it out on DVD!

p.s. Check out Soul Men at your local video store or at Amazon: