Shrek the Halls takes a bit of Scrooge and a lot of Shrek and tosses him into a warped version of the classic Night Before Christmas story. When the holidays hit the Swamp, Shrek seems to be the only one not gung-ho. And Donkey, in his usual annoying and exuberant way, makes it all too easy for Shrek to get cranky all-ogre. 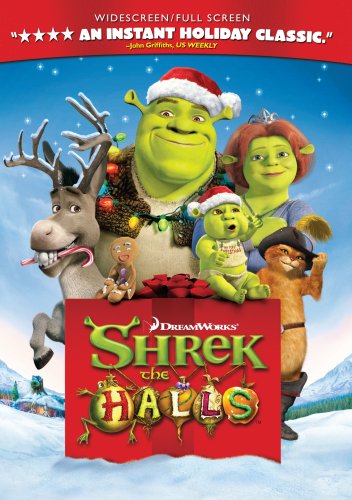 On the day before Christmas Eve, Donkey appears really rubbing it in… “You mean you haven’t trimmed your stockin’s, or hung your chestnuts, or roasted the tree? Or figified-your puddin’?!” And then, if that wasn’t enough, Fiona and the babies suddenly get excited about the impending holiday.

Shrek, in typical Shrek-fashion, doesn’t know what to do, so in a panic he heads into town to buy a book all about Christmas – “Christmas for Village Idiots” (I think I need a copy of this book). He follows each step, doing his best to make it an Ogre-friendly Christmas (kind of an oxymoron). And Donkey, in typical Donkey-fashion, manages to screw it up, inviting the whole gang over when Shrek was hoping for an intimate family-only affair.

Of course, that doesn’t happen. Donkey invites the whole gang to Shrek’s house – Puss-in-Boots, Gingy, the Three Blind Mice, Pinochio, the Wolf, the Three Little Pigs, and the Dragon all show up ready to party! Do you think Shrek takes this invasion personally? Definitely.

As in all Shrek productions, it’s the little things that really make this a great holiday story. Donkey telling his version of the Night Before Christmas turns into a Disneyland parade of food with Santa as a giant waffle. Puss-in-Boots of course has a different version, imagining Santa as a cool Spanish cat. And Gingy has the best verison of all. What’s Christmas like from a cookie’s perspective? A horror film!

And of course Shrek wants to tell his version of the story, but never gets a chance as the destruction caused by the party hits a crescendo and he blows his top, kicking all his friends out. Fiona and the babies go with them, since the Holidays are about friends and family and booting everyone out was a distinctly anti-Christmas thing to do.

The gang goes back to the house to settle down for the night and ask Shrek to tell a bedtime story. Shrek obliges with an Ogre-ified version of the Night Before Christmas that ends with “Smelly Christmas to All and to All A Gross Night.”

It’s really hard to argue with Shrek. The whole crew is back – Mike Myers as Shrek, Cameron Diaz as Fiona, Eddie Murphy as Donkey, Antonio Banderas as Puss-in-Boots, and the rest of the gang too! This holiday special has enough sarcastic/witty bits that it has to be seen a couple of times before you really see all the fun bits in the background. Blown-up frogs for ornaments, snakes for candy canes, and an old hollow log for a Christmas tree is just the beginning.

This special actually aired on FOX television during the 2007 Thanksgiving week. Now that Shrek the Halls is available on DVD, it has become a new favorite at my house for Christmas viewing!

Until next time, see a movie!

p.s. Pick up Shrek the Halls at Amazon for the holidays! 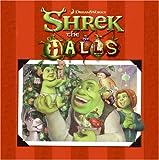