As huge fans of Wallace and Gromit, we were honored to get a chance to take a look at Shaun the Sheep – Off the Baa! when it was announced. 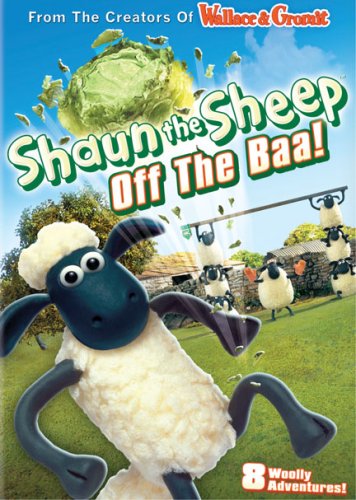 Shaun the Sheep first came on the scene in Wallace & Gromit’s short film, A Close Shave in 1995. He caused no end of trouble for the famous pair. And that appearance spawned a spin-off series of 40 seven-minute episodes. Off the Baa! is the first DVD collection of the show and includes eight hilarious episodes.

Each episode combines slapstick humor and old-style silent comedy in new and entertaining ways as we meet Shaun and all the other animals on the farm.

The eight episodes included on the DVD are:

Since I have soccer players at my house, we were all entertained by “Off the Baa” when Shaun and company turn a cabbage head into a soccer ball and have a match. The Pigs (always hungry) have to try and steal the ball for a mid-day snack of course!

“Mower Mouth” and “Mountains Out of Molehills” introduce a couple of other characters… a goat who eats everything in one case and a mole who’s digging holes all across the farm. Both cause no end of trouble for Bitzer and Shaun.

In addition to the eight great episodes, there are a few extras. A “Meet the Animals” feature that introduces us to the cast of characters for Shaun the Sheep from a kid’s point of view. And a couple of sneak peeks for a “Shaun of the Sheep” game for the Nintendo DS and “Wallace & Gromit’s Grand Adventures” games from Telltale Games.

For any fans of stop-motion animation, Wallace & Gromit, or just fun family animation, Shaun of the Sheep – Off the Baa! provides a fun introduction to Shaun’s world!

p.s.  Pick up Shaun the Sheep at Amazon and look for it on The Disney Channel!