When the movie Seven Pounds was released to theaters in December 2008, I was intrigued by the premise and Will Smith (who in my opinion has come a long way as an actor since his Fresh Prince of Bel-aire days). But it never really hit me as a Christmas movie. Neither did Marley & Me which was released about the same time or The Alamo which came out around Christmas in 2004… So we never got to the theater to see it. (We did see Marley & Me, but that was more because my wife’s a veterinarian than anything else.)

So when I heard Seven Pounds was being released on DVD, I knew I needed to see it. It looked like a powerful story and didn’t disappoint. 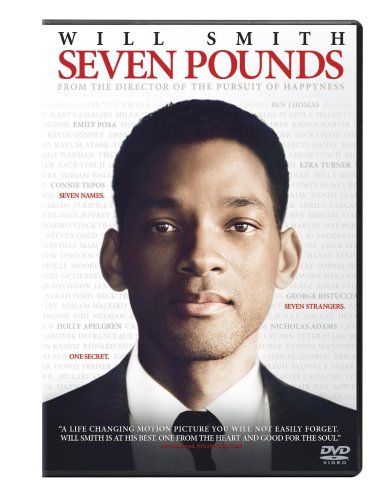 The story revolves around Ben Thomas (Will Smith), an IRS agent who seems to be behaving oddly. The stereotypical IRS agent is someone who relies on facts and figures, not feelings and heart. Ben did his homework, but relied on how he felt about particular people to render judgments. Through the course of the film, we see Ben find seven different people who deserved to have their lives changed. But he didn’t plan on falling in love with one of the seven. Would that derail his plans? Would he change his mind?

Acting alongside Smith in the movie are several other great actors. But the trio of Smith’s Ben, Rosario Dawson‘s Emily, and Woody Harrelson’s Ezra really hold the center of the movie together.

Is this a love story? Yes, but not quite in the way you might think. Is it a drama? Definitely. Is it a thriller? Yes and no. There are aspects of other thrillers, such as waiting for the big reveal until the last third of the movie. But you get the sense from the very beginning that there’s something inherently sad or broken about Ben and that he’s trying to do something about that.

I’ve seen negative reviews about Seven Pounds on other parts of the web. Rotten Tomatoes only gave it 28%. ScreenRant gave it 3 out of 5. And Entertainment Weekly gave it a D calling it an “unintentionally ludicrous drama of repentance.”

I watched it with my wife and we both loved the story. A powerful, romantic movie of redeeming one’s self in the face of unimaginable sorrow. Like all movies, you take from them what you will. We give it a solid 3.5 out of 4.

In addition to the movie itself, the DVD includes numerous extras.

“Seven Views on Seven Pounds” provides seven different perspectives on the movie, from the director and the writer, to the producers involved, designers, editors, and so on. Each person brings something different to the table. What was most telling for me was listening to how the writer, Grant Nieporte, came up with the idea after seeing someone at a party with the same deep sorrow that Ben experienced. This just proves once again that life presents opportunities for art if you keep your eye open.

“Creating the Perfect Ensemble” focused on Denise Chamian, Casting Director, talking about the challenges of bringing together the cast for this unique, emotional film. Finding actors to convey real emotions in a very short amount of time was tricky. Director Gabriele Muccino spoke about getting the relationship right between Emily and Ben’s characters. The efforts of Chamian and Muccino bring these characters to life on the screen.

“The Box Jellyfish: World’s Deadliest Co-star” describes just how deadly the Box Jellyfish actually is. It quietly sits in the background in a tank until you learn what Ben has planned for it. Mike Schaadt, the Director of the Cabrillo Marine Aquarium, speaks about the jellyfish and the challenges that it brings to the beaches of Northern Australia.

In “Emily’s Passion: The Art of the Printing Press,” we learn a little more about how Rosario prepared for the role as Emily. She went to the International Printing Museum in Carson, California, to explore the history of the printing press. You can find everything there from plates to movable type and beyond. This feature lets Mark Barbour, the Director and Curator of the museum, describe some of the many presses that can be seen in the museum. His passion for the printing process is easy to see.

There are four Deleted Scenes available, including “Ben Leaves Message for Dan,” “Dr. Gatsinaris Confronts Ben,” “Ben Gets Duke,” and “Ben Watches Ezra at the Mall #2.” The first two, I can definitely see why they cut. “Ben Gets Duke” would have added a bit of levity in the middle of a movie that could have used some lightening up in spots. And “Ben Watches Ezra at the Mall #2” didn’t really add anything that the scene they left in didn’t already cover.

The previews on the DVD include a few for upcoming movies, including Angels & Demons and The Accidental Husband, a trailer for the DVD of Rent: Filmed Live on Broadway, of which Rosario Dawson was a cast member, and two trailers for DVDs of other Will Smith Movies – Hancock and The Pursuit of Happyness.

If you didn’t get a chance to see Seven Pounds at the theater, I highly recommend that you take some time and watch it to form your own opinion. It’s worth your time.

p.s. Check out Seven Pounds at your local rental store or pick it up at Amazon: