It’s no secret that I’m just a big kid masquerading as an adult. And I’ve quite often told my family that if I ever get to the point where I can’t enjoy cartoons, that they might as well put me out of my misery. So I’ve been looking forward to Scooby-Doo and the Samurai Sword since it was announced a few months ago. 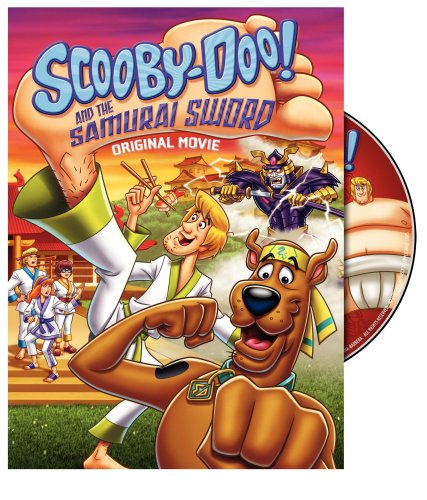 If you’ve missed the Scooby Doo phenomenon for the last 40 years or so, it boils down to a core set of characters:

Scooby and the gang call themselves “Mystery, Inc.” and travel the world solving or debunking various mysteries. Whenever possible, they drive around in Fred’s van (aka “The Mystery Machine”) that has survived since the ’60s.

Occasionally, the gang gets a chance to take a vacation. In this case, Daphne was invited to take part in a martial arts competition in Japan and her friends tagged along for moral support. And, as always, they find themselves smack dab in the middle of a mystery.

The ghost of the Black Samurai has evidently risen to return to the land of the living. If he finds the Doom Sword, he can regain his body and begin to conquer the world again. Of course, Scooby and gang have to find the sword before the bad guy does.

Unfortunately, in some ways Scooby and the gang probably should have stayed home rather than head to Japan…

If there’s a cliche’ about Japan, I think they managed to fit it into this movie. If you’ve ever seen Bruce Lee‘s Enter the Dragon, the secluded island for the martial arts tournament seems all too familiar. If you like fortune cookies, you’ve probably heard “The journey of a thousand miles starts with a single step.” And obviously if you’re in Japan, you must do some origami…

Now, that doesn’t mean that this movie is a complete waste. I found myself laughing out loud when Shaggy & Scooby managed to pull a Bugs Bunny-style routine with a group of cannibals and a big soup pot. With some quick thinking, the buddies managed to convince the chief to get into the pot.

And in another scene, the Indiana Jones fan in me felt appeased as the gang found themselves rushing through ancient booby traps. As the darts flew from the walls and the giant pillars rose and fell, the homage fit in with the traditional Scooby chase scene.

But even if you look past the cliches, there are other little things. There’s an animated fight sequence between Daphne and Miyumi after the gang arrives at the tournament island that’s just filled with sloppy animation. Little things like a leg bending or stretching the wrong way really take me out of the moment.

The kicker for me was reading the text on the back of the DVD box… “Scooby and Shaggy are indoctrinated by an unlikely sword master who teaches them Boshido, the Way of the Samurai.” If you’re going to talk about Bushido, you should probably spell it correctly.

In addition to the movie on the DVD, there’s also a feature called “Scooby-Doo Dojo” that walks kids through a bit of background on martial arts, stretching, and some safe, simple, and defensive martial arts moves. All too often I think kids have the wrong idea about martial arts and this is a great way to show them some basic blocks without having them trying to chop their way through every fight.

This isn’t a bad story, but I was disappointed by the little things I noted earlier and will only give it 2 out of 4 stars. I know my girls (ages 4 and 8) enjoyed it, though my youngest was a bit scared by the Black Samurai and his use of theatrics (smoke, lightning, thunder). So though the movie is unrated and meant for kids, I’d watch with the younger ones if they get scared easily.

If you missed Scooby-Doo and the Samurai Sword, be sure to check it out on DVD at a rental or video store near you if you (or your kids) are fans of Scooby Doo cartoons!

p.s. Pick up Scooby-Doo and the Samurai Sword at your local video store or at Amazon: