Yes, I’m talking about Ron White, the cigar-smoking, Scotch-drinking comedian from the Blue Collar Comedy Tour. He’s back for a new comedy special. And he’s got some great new material for you.

If you don’t know White, he gained instant attention alongside Jeff Foxworthy, Bill Engvall, and Larry the Cable Guy as they started touring together in 2000 as the Blue Collar Comedy Tour. And he has only gotten better since then. The timing and construction of his bits for this show are wound together perfectly, often taking you to unexpected places.

Behavioral Problems covers a variety of taboo topics, from his wife’s plastic surgery (he carries her silicone implants around in his “man purse”), a recent incident with Florida police regarding his plane and 7/8 of a gram of marijuana, and a 14-foot grizzly bear. And as my wife and I sat down to enjoy this DVD where he riffs for over an hour, we laughed so hard at one point that we could hardly breathe. It’s a good thing DVD players have a “pause” button or we would have missed the next 15 minutes of his show!

This is the same show that aired on Comedy Central back in April, but the DVD includes more than 40 minutes that weren’t in Comedy Central version. I missed what aired originally, but I can only imagine what had to be cut for language or content to get it past the censors.

From the time White comes on stage to the time he leaves, he enjoys a bottle of Scotch a glass at a time (on the rocks of course) and a stogie. It doesn’t slow him down at all as he pours another glass or relights the cigar, and in fact provides him with some great pauses between bits for certain bits sink in before he gives you the punchline.

Now, if you haven’t seen White before, this is not a show to share with the kids (unless they’re in college or adults). There is enough swearing, innuendo, and spelling things out that your kids will probably still be asking questions about the content a month later.

That said, I learned several things from White during this show.

First, never tour London with a Scottish Nationalist. Where it might take you a day and a half to see the sights in London normally, it will take 10 minutes if your driver is a Scotsman who believes that Scotland should be independent from the U.K.

Second, Scotch Guard is an aptly named product when it comes to White’s couch, where he sometimes spills Scotch. Now if they only had Vodka Guard…

And if you’re ever attacked by a 14-foot grizzly bear in the woods, a .38 pistol will not do you much good. In fact, it just might get you eaten faster. This was the bit that made my wife and I laugh so hard. Wait for the part where he talks about Deep Woods Off. We decided that we need a can of White’s version of the product for both of our workplaces. (I’d tell you what it is, but I don’t think the censors would allow it!)

Ron White is a very funny man with a gift for self-deprecating humor that strikes home for most of us. Some people may be offended by some of the language or content, but if you’re in need of a good laugh, I’d be surprised if you didn’t get at least one from this show. Even White was amused during parts of the show when he would swap words accidentally. For instance, he mistakenly says “UFO tour” instead of “USO tour” during one part of the show, and you can imagine the difference a letter makes.

Behavioral Problems gets a solid 4 out of 4 from me.

Be sure to check out Ron White: Behavioral Problems at your local video store or online retailer. Just make sure the kids are in bed when you watch!

p.s. Get Ron White: Behavioral Problems at your favorite local retailer or online: 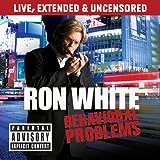