As a fan of the Resident Evil movie franchise, I was very curious to see what Resident Evil: Degeneration looked like. Completely done as computer generated animation, this movie picks up seven years after Raccoon City was destroyed. 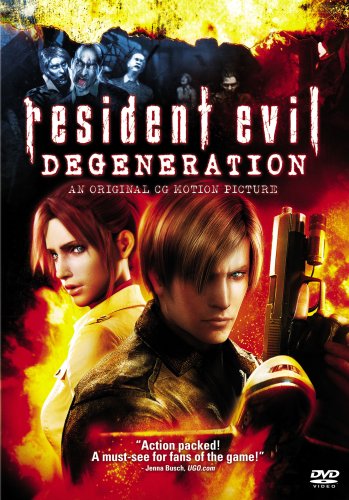 For those of you unfamiliar with the Resident Evil backstory, let me provide some context. In 1996, Resident Evil (originally named Biohazard in Japan) was released on the Sony Playstation. It was a huge hit that has spawned multiple games (including Resident Evil 5 due out in 2009) as well as movies and other media. In 2002, Milla Jovovich starred in the first Resident Evil movie and has since gone on to star in two sequels.

In the games and movies, a huge multinational corporation known as the Umbrella corporation had created Raccoon City, which was an entire industrial complex, complete with underground labs and above-ground fully functioning city. Unknown to the inhabitants of Raccoon City, deep below in the underground labs, Umbrella bioengineering scientists were working with something called the T-virus and it was accidentally released. The T-virus kills the infected person or animal and turns them into rampaging killer zombies, who can then infect others by biting them.

Resident Evil: Degeneration picks up seven years after Raccoon City was quarantined and destroyed by a nuclear weapon. A terrorist organization had gained access to the T-virus and was releasing it in small areas to test its effectiveness as a bio-terror weapon. To say the least, it was very successful.

Claire Redfield and Leon S. Kennedy, two of the rare survivors of Raccoon City are drawn into the intrigue as the airport in Harvardville comes under attack by a rogue warrior seeking revenge for the death of his family at Raccoon City. And as if the zombies created by the T-virus weren’t enough, the deadly G-virus is also released and creates a new rampaging mutant.

Though this movie follows the traditional Resident Evil plot of showing normal life or survivors, setting the T-virus in motion and releasing the zombies, and then fighting the big baddie at the end, I was shocked and amazed that a totally CGI movie that focused on human characters actually worked and worked well.

The animation was unbelievably detailed. A few scenes provided close-ups of characters where you could see skin, hair, and pores on generated characters for a photo-realistic touch. Fire, smoke, and dust were all extremely well rendered as well.

There are a few scenes where you still get that “video game” feel as you watch characters haltingly walk down hallways, guns or weapons drawn. But it’s improved markedly since the beginning of the CGI-created characters in video games.

In addition to the movie, the DVD includes a few odd extras.

The “The Generation of Degeneration” features interviews Makoto Kamiya and other CAPCOM staff as they talk about the film. It was interesting to hear why they used English voice actors for the motion capture and how they created the film itself.

“Character Profiles” provides a bit of text for each character in the film along with a video or photo profile taken from parts of the film.

“Voice Bloopers” was very strange. I think the creators of the movie wanted to try and introduce a blooper reel and this was about as close as they could get, reusing clips from the movie and simply adding “funny” voiceovers in places that were more odd than funny.

“Faux Leon Interview” was another odd feature. It had someone interviewing a guy dressed in a motion capture suit and riffing on what it was like to play Leon S. Kennedy.

“Resident Evil 5: Special Footage” shows what the new Resident Evil 5 video game will look like when it is released in 2009. Two trailers for the game are included: one from the Tokyo Game Show 2008 and the other that was released as a special theatrical trailer. Both show off the amazingly smooth animation and motion mixed with gritty gameplay. Hopefully the next animated film will be done in a similar style.

Overall I was very impressed with this movie. It didn’t pretend to be anything it wasn’t, but it proved how far CGI technology has come in a very short time and was a fun movie!

So check out Resident Evil: Degeneration on DVD on December 27, 2008!

p.s. Order it at Amazon here: