Why did this film not make it to the theater anywhere I could see it?

Redbelt, about a martial arts instructor Mike Terry (played by Chiwetel Ejiofor), was released in May 2008 and was out on DVD not too long after that. Though it received some critical acclaim, it has been panned by many reviewers all over the net. 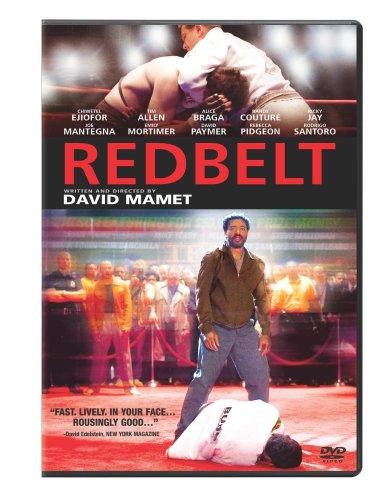 I honestly didn’t think it was bad at all. I enjoyed the philosophical aspect of this David Mamet production. Mamet both wrote and directed this movie, about a martial arts instructor drawn into a movie production and suffers the consequences of bad people making bad decisions.

Jiu-jitsu is the art of grappling with a bit of wrestling throwin in for good measure. Terry has a small school where he teaches mostly cops the art of close combat. Occasionally he gets other students (such as the lawyer in the movie) and teaches them not only the martial art, but how to have more control over their own lives.

This was a movie that dealt with poor choices in the face of holding true to your life philosophy. Terry’s philosophy was “There’s always a way out. You just have to find it.”

Was this a great movie? Not really. Was it as horrible as many people seem to think? I don’t think so.

What did I like? The martial arts were real. The relationships that Mike Terry had with his students were real. Where it started to fall apart was in the relationships with the movie people. Somehow Tim Allen managed to play a slimy movie actor trying to hold on to a failing career. But Cyril Takayama as the magician was amazing. He kept things interesting in a few places where the action slowed to a crawl.

What didn’t I like? It seemed to drag a bit (did I already mention that? 😉 ). The battle at the end, though well choreographed, dragged long enough that it lost some of its effectiveness. All of the mixed martial arts bits were more than a little boring as well. And the stories seemed to be a little bit of a hodge podge.

Ultimately it boiled down to Ejiofor’s performance, which I thought was excellent if a little subdued at times. But I could identify with trying desperately to live your life by your rules.

I’m giving this a solid 2.5/4. If you enjoy more philosophical martial arts movies than actual combat footage, this movie is for you. If not, it’s not the best Mamet film I’ve seen. It’s nice to see Ejiofor in a lead role after his role in Serenity. He’s a great actor with a powerful presence on screen.

p.s. If you want to check out this movie on DVD, check the following Amazon links: