There are times I wish I had premium channels on cable. When Penn & Teller began doing their show Penn & Teller: B.S.! on Showtime in 2003, that was one of those times. 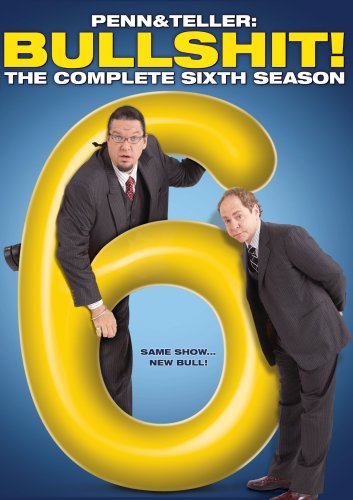 If you’ve never seen the show, Penn Jillette & Teller (a pair of magicians/comedians who have been working together since the mid ’80s) basically try to point out where things don’t pass the sniff test. They poke holes in the facts or arguments for anything that just doesn’t smell right, including supernatural beliefs, fads, marketing misconceptions, pseudo-science, and so on. Each episode is about 30 minutes long, works its way through a particular topic, and uses magic, comedy, blue language, and sex to keep things entertaining.

That said, my favorite episodes of the season debunked the pseudo-science behind the entire sleep industry, global warming, and “New Age” medicine.

As someone who has sleep issues, I’m always looking for ways to increase the quality of sleep when I actually get some. Because of this, I was both disheartened and amused by the facts presented by the comedic duo in the episode “Sleep, Inc.” I was already aware that each mattress company has its own way of spinning the truth. Sometimes the spring was wrapped once, sometimes twice, and sometimes it was placed between layers of foam… But in all cases it’s still a spring. And then there were all the New Age solutions, including a heating pad with magic crystals the salesperson couldn’t even explain. Honestly, I think a mallet applied to the forehead would work as well as some of the things being marketed to insomniacs!

In “Being Green,” the duo worked to debunk global warming but came to the conclusion that they really can’t. It may or may not be happening due to our own naive way of destroying the environment around the world, but you can’t prove it yet either way. As such, it once again turns out to be a way to make a quick buck for a few people and a way to make others simply feel like they’re doing their part to offset any perceived damage they may have done.

Penn & Teller compared the “green” industry to the Indulgences sold by the Catholic Church during the Middle Ages to pay the church for any transgressions. Today, it’s private enterprise making money from your environmental guilt. Have you sinned against the environment today? Give us some money and we’ll plant some trees.

And in the “New Age Medicine” episode, the duo went to great lengths to show the “quackery” of some of today’s New Age health professionals. Through the use of crystals, tuning forks, and acupuncture needles, you see charlatans or true believers (take your pick) applying questionable techniques and tools to cure what ails a patient. To prove just how gullible some people are, Penn & Teller even went so far as to use a plunger and a kazoo to “heal” patients in their own temporary clinic. It worked just as well as the other methods!

As P.T. Barnum is often quoted as saying, “There’s a sucker born every minute.” And so long as people are gullible, there will be people around to take advantage.

However not all of the B.S.! episodes focus on debunking the pseudo-sciences, and the “NASA” episode is a good example. The duo argued that private industry might be better suited to finance NASA instead of taxpayer money, which I tend to agree with. Virgin Galactic is one of the firms taking advantage of this new phase of the space race. With tickets starting at $200,000 for a sub-orbital flight, Richard Branson, the leader of Virgin, will make even more money than he is now.

Penn & Teller are extremely intelligent, talented, and funny people. And it’s quite obvious that when they set about tearing down an idea they do an amazing job. Just be prepared for some colorful language and gratuitous nudity!

p.s. Pick it up now from Amazon: