Do you remember the 1980s? It was an era of action movies from Jean-Claude Van Damme, Dolph Lundgren, and Steven Seagal. These were not the best actors, but they didn’t try to be. Their films were meant to entertain us with fight choreography, slow motion, and tough guy characters. Movies like Bloodsport and Hard Target, Above the Law and Marked for Death, Universal Soldier and Showdown in Little Tokyo – they all had a simple premise and you knew what you were in for going in. 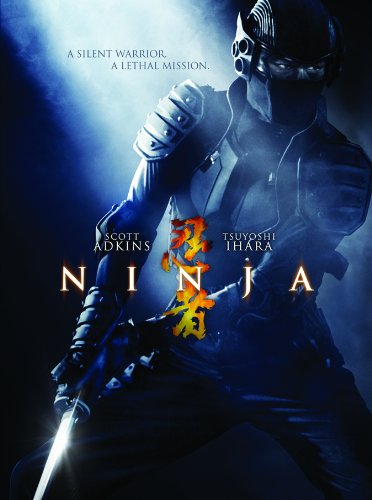 Now we live in an age where Direct-to-DVD isn’t necessarily the kiss of death. Movies like Fight Night and Smokin’ Aces 2: Assassin’s Ball prove that you can produce great movies without having a huge budget and still get them out to an audience that will appreciate them. Unfortunately, not every movie can be a masterpiece. And the Direct-to-DVD market still has some stinkers.

Ninja stars Scott Adkins as Casey and Tsuyoshi Ihara as Masazuka – two martial arts students learning the ways of the ninja in a remote dojo in Japan. When Masazuka breaks the rules and attacks Casey with a real sword (not a wooden one) during a demonstration, he is kicked out of the school to find his own way. Like any bad seed, he finds his way back again to take his revenge and take the ancient ninja treasures locked in an ancient box. Casey must stop his old school mate from taking what isn’t his.

The plot isn’t anything we haven’t seen before, going back to the Ninja and American Ninja movies of the 1980s, which I have to admit I watched as I was growing up. Back then the good guys even wore white ninja apparel sometimes to set them apart from the bad ninjas, who always wore black. No such luck in this film.

I think that the lack of any originality was my biggest problem with this incarnation of Ninja. There just wasn’t much to hold on to. The plot could come from any bad martial arts movie of the 1980s. The fight choreography was ok, but not spectacular. The gratuitous blood spraying everywhere as limbs and heads were sliced off was pushing it a bit too far. One bright spot was the use of a crutch as a staff during a fight on a subway where Namiko (Mika Hijii) broke a guy’s arm. Pretty sad when that was the high point.

Adkins isn’t the best actor, but he was certainly in amazing physical shape for this movie. He did his level best during all the fight scenes to make them exciting. And it was difficult to fault all the Japanese-speaking characters for their performances as the typical staid, strong, silent warriors they portrayed. But as I sat through this movie, the lack of emotion from everyone involved almost put me to sleep.

There were no extras, just a few trailers for other First Look Studios films on DVD such as Lost City Raiders and Triangle.

If you’re in the market for a ninja movie, I’d look for 2009’s Ninja Assassin on DVD (March 16, 2010) from the Wachowski brothers and director James McTeigue. The fights were even more bloody, but much more original in their choreography.

p.s. Pick up this and other Ninja movies at Amazon below!