Zombies. It seems there’s a worldwide resurgence in zombie attacks these days – in movies, television, and books. But the traditional perception of a zombie started in 1968 with the release of George A. Romero‘s Night of the Living Dead. Romero used traditional storytelling, merging the “threat from space” with the rise of a virtually unlimited army of the dead seeking to consume the living. 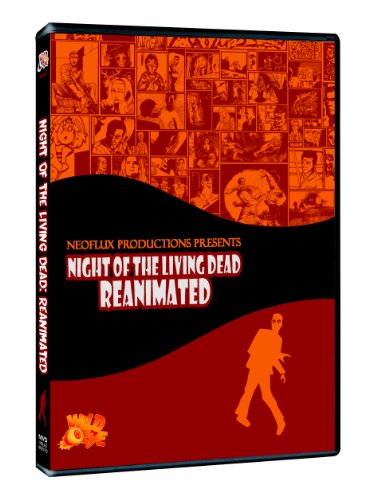 What is it about zombies that makes them such a compelling horror figure? They feel no pain. They have an insatiable hunger for living tissue (and yet won’t eat each other). Anyone they bite becomes another member of the undead army. And no matter how many you destroy (bullet, blunt object, or blade to the brain), there always seem to be more of them.

As you can see, zombies have a special place in my heart even though they’d eat it like a valentine if they were given the opportunity. So when I heard about the Night of the Living Dead: Reanimated (NOTLD:R) project which brought together nearly 150 artists and animators from around the world to revisit scenes from the classic film in their own particular mediums, I knew I had to check it out. NOTLD:R didn’t disappoint.

I knew it was going to be an eclectic mix of styles and media – but I didn’t know just how eclectic. These artists used everything from rotoscope and abstract shapes, to sock puppets and stop-motion animation, to cartoons and video games to show their vision of these scenes. And through it all, I found myself fascinated by the sheer variety, skill, and talent of all of these people from around the world.

My only complaint (a very minor one) is that I didn’t have a second monitor handy to play the original beside the animated version. But I will be fixing that issue by downloading the movie and watching it on my laptop at the same time I’m watching the animated version on my television. Many places it’s easy to see the influences of the original – the shapes, backgrounds, and so on showed themselves in the art. But in others, as with the abstract shapes scribbled in that appear as zombies, it’s less easy to see the old in the new. That’s not a bad thing honestly – making something new out of something old – so it’s just a very minor nit.

Beyond the movie itself, there are an insane number of of extra features. The commentary alone is worth listening to. Jonathan Maberry, one of my favorite zombie fiction authors of recent years, joins Mike Schneider (project producer), journalist Pierre Gutierrez, and Wild Eye’s Rob Hauschild to provide some context for the project. Listening to these folks discuss how the movie came to be over the course of 18 months from inception and request for submissions to the final product is simply incredible. “Reanimated” refers to the fact that the movie initially had life, but it’s now being animated again in a different manner.

Also included is a second commentary track with Mike Schneider, filmmaker Keith Croker, and Corpse S. Chris of “Horror Host Graveyard” which specifically deals with how the project was put together. And even a third commentary featuring 27 artist call-ins talking about the scenes they produced. It’s obvious that everyone involved, whether an artist, producer, or promoter, feels passionately about the project and enjoyed the aspects they contributed to.

Beyond the commentary, there are extras upon extras. Not everything could be included in the final edit due to time constraints, so many sections had to be cut down. In the extras, you see the full extended scenes as created by the authors. Among my favorites was the “Cats and Mice” extended scene from Andres Silva, which portrayed a scene in almost a Tom and Jerry style of cartooning.

You also get several “Behind the Scenes” videos where three artists – Ryan Sigg, Calum MacASKILL, and Mike Boas – show how they produced their segments. I watched all of these with my daughter, who is an aspiring artist, and found them fascinating. The artists provide great details about their different processes – from rotoscoping with Boas, producing abstract zombies with MacASKILL, and how to film stop-motion animated scenes with plasticene figures and a green screen with Sigg.

Many more extras are included, but I highly recommend watching “The Zombie Encounter Panel” – an hour long panel filmed at a conference in 2009 that features Maberry, Dr. Kim Paffenroth, John Joseph Adams, David Barr Kirtley, Gutierrez, and Hauschild. Like all panels, each member has a unique perspective on zombies in a variety of media. Listening to the panel is like having your own private zombie conference in your living room. It was great to listen to their first zombie experiences, favorite unknown zombie media, and what they’d do during a zombie attack!

If you like zombies or art, I highly recommend you check out Night of the Living Dead: Reanimated when it’s released on DVD on September 21, 2010. Not only is the artwork amazing, but the extras included make this a must have for anybody in your zombie horde.

p.s. Pick up this and other great DVDs and books below!