Every now and then we get to witness events in nature on the big screen or television that are just astounding. In 2007, Planet Earth from the BBC and the Discovery Channel came to America, narrated by Sigourney Weaver and showed an amazing array of life on our planet in glorious HD quality. Since then, I think the BBC and other documentary filmmakers have been working hard to top themselves. 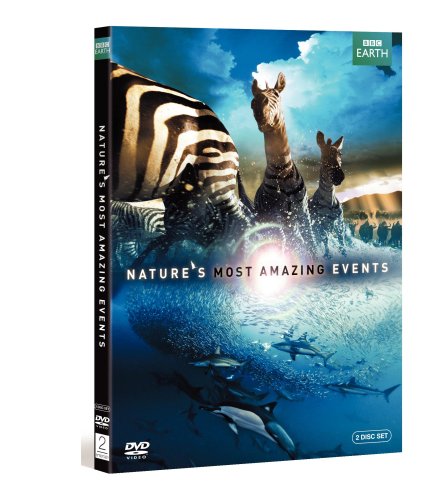 Though Nature’s Most Amazing Events is an incredible accomplishment, I don’t think it quite matches up to the splendor or Planet Earth. That said, it includes some unbelievable footage shot of some inhospitable and nearly unreachable places all over the globe over a period of years by extremely dedicated people. However, where Planet Earth had little time to focus on a single area and the stories of individual animals, Nature’s Most Amazing Events uses storytelling to create an emotional bond with the audience.

This 2-DVD set includes all six episodes from the series, and appends a “diary” to the end of each. Each diary tells the stories of the filmmakers as they were trying to get to these places and record the footage used for the episode.

Narrated by David Attenborough, his very correct British accent only made it difficult to understand what he was saying in a few places. Notably, each time he said “school” we heard it as “shoal,” which caused a bit of confusion for myself and my family. But once we figured out he was saying “school,” we understood exactly what it was he’d been saying.

In “The Great Melt,” you learn about the impact of global warming on the Arctic ice and the dangers the increased melting poses for the polar bears. However, beyond the polar bears you begin to see the huge circle of life as melting ice sends fresh water into the sea and creates habitats for an incredible array of fish, birds, seals, whales, and more. We were particularly amazed by the shots of the narwhal migration through the ice. Though I’d seen pictures of these mysterious creatures before, actually seeing them wind their way through the canals and cracks opening in the melting ice was beautiful to behold.

“The Great Migration” and “The Great Flood” told stories of the animals of Africa dealing with hostile and often deadly environmental conditions, yet somehow finding ways to survive in the Serengeti and Bostswana’s Okavango Delta. We were blown away by the transformation of the Okavango from cracked and dried sandy plains to a lush, green field and swamp with bountiful fish, grasses, and wildlife.

The photography was top notch for all of the episodes and they really do bring you as close to the action as you could possibly be without actually being there yourself. Definitely an amazing accomplishment by a devoted and talented crew of people all around the world.

Beyond the episodes themselves we were captivated when the “diary” for each episode would appear. These filmmakers are not only consummate professionals as far as camera-work goes, but are all adventurous souls who deserve to have their own stories told. In “The Great Salmon Run,” one cameraman swam with Grizzly Bears who were starving and trying to catch the salmon while he took footage of them doing it. Talk about nerves of steel. And in “The Great Tide” we saw an experienced underwater photographer get his flipper nibbled on by a shark. These people deserve our admiration for their courage and dedication to their craft.

If you are a nature lover or are simply captivated by the beautiful documentaries coming out in high definition these days, Nature’s Most Amazing Events should be on your list of DVDs to pick up. Each story is truly beautiful to behold. I can hardly wait to see what the BBC will do next.

p.s. Be sure to pick up Nature’s Most Amazing Events at Amazon below: