What is it about Jim Carrey and animals that just clicks when they’re combined in a movie? I still remember Carrey as “Fireman Jim” on In Living Color and wondering how in the heck he made his face stay in that awful grimace. When he did both Ace Ventura: Pet Detective and The Mask in 1994, he was permanently on my radar. The character of Ace Ventura was at once annoying and endearing, and somehow he pulled off working with an entire zoo of animals on film. 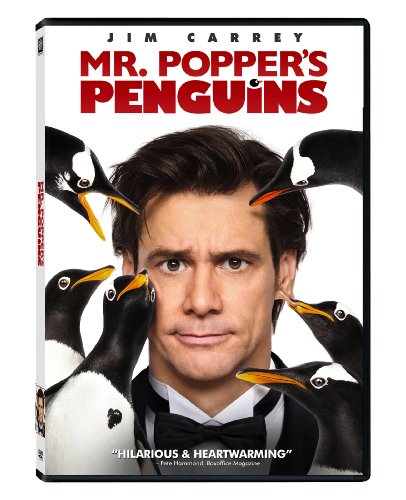 When Mr. Popper’s Penguins came out this past June, everyone in my family wanted to see it. However, as things sometimes work out, we never got a chance so we knew we’d definitely have to check it out on DVD. Thankfully it was released this week and we had a chance to watch.

The movie is based on Mr. Popper’s Penguins, a Newbery-award-winning novel published in 1938 by the husband and wife team of Richard and Florence Atwater. Jim Carrey plays Tom Popper, a man dedicated to his work in buying and selling New York City real estate to the detriment of all other relationships in his life. While Popper was growing up, his father was off exploring the world and rarely home to share his experiences. To make up for it, his father always sent fun gifts to his son from wherever he was. When the elder Popper dies, he sends his son one last gift – a set of penguins from Antarctica. From the moment Popper meets the first penguin, his life starts spiraling out of control and putting his priorities back in order.

Anyone who’s had a pet can probably attest to how crazy life can get when you have an animal in your life. There’s something about sharing your life with a pet that gets them under your skin. Sure, there’s the day-to-day chores of feeding and cleaning up after critters big and small. But little by little they become bonded to you and you become bonded to them despite how much they may completely drive you bonkers.

As Popper gets used to having six penguins in his NYC apartment, he finds himself caring for these frozen characters from the South Pole. And along the way, he finds ways to reconnect with his kids Billy (Maxwell Perry Cotton) and Janie (Madeline Carroll), and his ex-wife Amanda (Carla Gugino). Of course, there are a few hiccups along the way like a zookeeper (Clark Gregg) obsessed with taking the penguins away, the woman who owns the Tavern on the Green in Central Park, Mrs. Van Gundy (Angela Lansbury), and Popper’s bosses at the real estate firm.

Honestly I wasn’t sure if I was going to like Mr. Popper’s Penguins based on the trailers. It’s Jim Carrey playing a similar character to other roles like he has in Bruce Almighty and Liar Liar. That however turned out to be a boon – there’s something about this human cartoon interacting with animals and kids that makes him quite endearing.

Beyond Carrey, the penguins themselves have quite a bit of character. Each penguin has its own personality from the first time they appear in the film to the end. And the combination of live action and CGI penguins was seamless throughout the movie. The scene with the birds sliding down from floor to floor in the Guggenheim was quite funny as you saw people go flying left and right as the birds whizzed past.

Included in the DVD extras are the animated short “Nimrod and Stinky’s Antarctic Adventure,” a collection of deleted scenes, a gag reel, “Ready for Their Closeup,” “Ladies and Gentoomen,” an audio commentary featuring director Mark Waters, editor Bruce Green, and visual effects supervisor Richard Hollander, a sneak peek at Tooth Fairy 2, and the original theatrical trailer.

The animated short was disappointing, done in a “moving comics” style that was a bit jarring to me. However I was impressed that Clegg would lend his voice to the zookeeper in the short. The gag reel proves just how little Jim Carrey has changed since Ace Ventura. And “Ladies and Gentoomen” is a great educational piece about the penguins featuring Jessica Perry, a Senior Level Aviculturist at Sea World.

We really enjoyed “Ready for their Closeup,” which showed the great lengths the actors and production crew went to for the Gentoo penguins. Everyone involved in the movie really seemed quite taken with them. The work that went into training the birds as well as training the actors to work with them. And like any time you work with animals, the feature really shows how they can take over the set. If there weren’t enough outtakes in the gag reel for you, there are some amazing clips with Carrey and the penguins here.

Overall Mr. Popper’s Penguins was a fun movie with some great extras to learn more about the penguins themselves as well as making movies with these fun birds.