Sometime in the mid 1980s, I was exposed to Monty Python. It was, of course, Monty Python and the Holy Grail, which of course stunted my growth and imprinted itself upon my brain to the point where Python lines began creeping into every day conversation. My parents were appalled. Neither could stand the humorous antics of these men dressed up in costumes banging coconuts together to make clip-clopping noises. 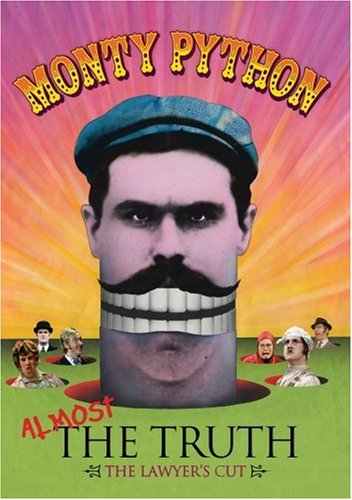 Yes, it’s true. I’m a Monty Python addict. But nothing really prepared me for the depth of Monty Python: Almost The Truth. As a Monty Python fan, I learned things I had never known before in each and every episode. Because of this, I will recommend to all of my closest friends (most of them Python fans) that they must watch the series on A&E and pick up the DVD set.

But I’m getting ahead of myself here. So why is this such a ground-breaking documentary series? Because, like all great documentaries, it presents information that you may or may not have heard before in such a way as to make you think about things more deeply. I never knew how the Monty Python troupe came together or what they did before. It simply wasn’t something I considered prior to watching this series.

Starting with Episode 1, we learn the humble beginnings of each member of the troupe and how they found their funny bones on their own or in pairs before eventually finding their way together for Monty Python’s Flying Circus. By the time you get to Episode 4, you realize that not only are they very funny and talented, but they’ve all gone through some rough times as artists and people. And by Episode 6, you come to find that they’ve all found ways to move beyond Python and find their own ways in the world.

Some of the startling facts that I learned from Monty Python: Almost The Truth:

Documentaries are often long, dreary, boring affairs. But Monty Python: Almost The Truth couldn’t be further from the norm. All the way through I felt entertained and educated.

When you arrive at Disc 3, you find a collection of sketches, extended interviews, interview outtakes, and the Terry Gilliam Picture Gallery. Among the sketches are three of my favorites – “The Parrot Sketch,” “Ministry of Silly Walks,” and “The Cheese Shop.” The fact that these guys could sit down and write lines like “He’s off the twig! He’s kicked the bucket, He’s shuffled off his mortal coil, run down the curtain and joined the bleedin’ choir invisible!! THIS IS AN EX-PARROT!!”, the absolutely insane list of cheeses from around the world that is somehow made funny by the fact that the proprietor of the cheese shop has no cheese at all, and then the simple yet odd physical comedy of John Cleese doing his silly walk… It makes me laugh just to think of any of them.

As I said at the beginning, this collection is a must have for any serious Monty Python fan. Rush to your favorite retailer and pick up your copy of Monty Python: Almost The Truth today. You won’t be sorry!

p.s. Pick up this and other Monty Python DVDs below!