Sometimes even the combination of an amazing story from Hungary in the 16th century, a beautiful actress, and Connor MacLeod can’t quite get a movie on track. Filmed in Austria, Germany, and Hungary, the locations were gorgeous. Add to that the horrific tales of Countess Elizabeth Bathory, accused of killing and torturing young women and possibly even bathing in their blood to keep her youth, and you have some great elements that could have made for a good, if not great, horror film. Unfortunately it doesn’t hit that mark…

Metamorphosis was filmed in 2007 and is coming to DVD on August 24, 2010. The film stars Christopher Lambert (Highlander), Corey Sevier (Decoys), and Irena A. Hoffman (Four Christmases). It was written, directed, and produced by Jeno Hodi, who also directed Black Sea Raid and wrote Armstrong.

At the beginning of the film, we see Constantine Thurzo (Lambert) at the funeral of his brother. The strange ceremony ends with men driving a stake into his brother’s heart before burial in consecrated ground. Constantine wants his brother to be buried near their castle and digs the body up after dark, intent on reburying the body in the family cemetery. And as you might suspect, bad things tend to happen when you remove the stake from a dead body in a horror movie.

Keith (Sevier) is doing research for a book about the Countess and brought along his friends J.J. (Charlie Hollway) and Kim (Jennifer Higham) for company. While on their way to a monastery near the Bathory castle, the trio gets lost at night in the Carpathian Mountains and pick up the mysterious and beautiful Elizabeth (Hoffman) who offers to help them find their way. When they get there, they learn that the monks won’t take them to the castle as they had agreed because of recent wolf attacks in the area.

But don’t worry, Elizabeth knows the way to the castle. Along the way, the jeep the group is driving hits a rock and everyone is thrown out of the vehicle as it bounces down a mountainside. Somehow nobody gets seriously hurt and they continue on foot to the castle, meeting up with a creepy bearded man and his girlfriend also headed to the castle.

After being chased by wolves and meeting up with a monk and a nun, they manage to find their way to the castle and get the lights turned on. It seems however, that they might have done better if the lights had stayed off…

First, let me talk a bit about the good things for this film.

The use of the legend of Countess Bathory was a great start. Anyone who allegedly drains victims of blood so she can bathe in it to stay young is definitely a perfect horror movie character. It’s not the first time we’ve seen the Bathory legend used in a film either. The animated movie Hellboy: Blood and Iron used a similar legend as the backstory for its plot and did it more effectively in cartoon form. My only wish for Metamorphosis was that they’d managed a stronger story based on the history and legend.

Also, Lambert seemed to have a great time with his character Constantine as a vampire. The “Lambert laugh” was in full swing along with the evil grin we’ve seen in movies like Highlander and Mortal Kombat. Honestly, it was Lambert’s gleeful villain that saved the film for me. Everyone else took themselves far too seriously.

It’s never good when I can’t come up with a third good thing for a film. Honestly, I’m not sure if it was the acting, the directing, or the writing that really made it drag in places, but something simply didn’t click.

My biggest issue was the film was the way that it played with time. Once the group crashes down the mountain, there are these bizarre flashes where you see the same scene a couple of times in succession. Later, these “flashes” are explained as Keith’s attempts to change events while they were all in Purgatory. Vampires in this world seem to have the ability to shift from the real world to the spirit world of Purgatory at will. And since Keith wants to change how things ended up, he tries a few times to adjust how things happened.

It was this little wrinkle that kept me from really enjoying the movie. I think if those aspects of the story had been written out of the script and the film was made more linear, it might have worked better.

Beyond the movie, some trailers, and the option for Spanish subtitles, there were no extras for the DVD.

So if you’re interested in the Bathory legend, I would recommend Metamorphosis as a renter. But other than that, unless you’re a huge Christopher Lambert fan, I’d probably avoid this one.

p.s. Look for this movie at your local rental store, pick up Hellboy: Blood and Iron, or read about the stories of Countess Bathory…
Metamorphosis 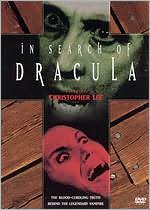