When Jonathan Swift penned Gulliver’s Travels in the early 1700s, do you think he could have ever considered the concept of his work being turned into a cartoon? Though political cartoons were prevalent during his day (they started to appear around 1700), and I suspect that Gulliver was used in a variety of political cartoons in Swift’s day, the modern idea of a cartoon as moving pictures didn’t really catch on until the around 1824 with the zoetrope and later with moving pictures around 1890. 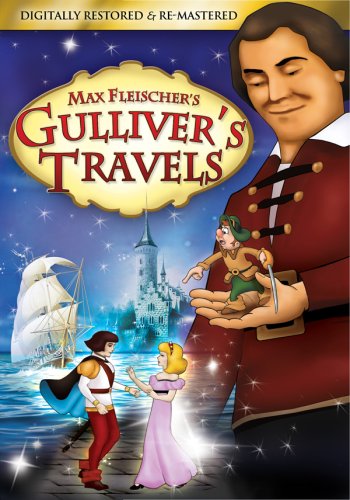 Max Fleicher was one of the amazing people who was an early pioneer in animation. In 1914, Max and his brother Dave made their first cartoon using their Rotoscope design. Fleischer Studios was founded in 1921 by the brothers and they began creating a number of animated series starring Koko the Clown and Fitz the dog. In 1928, Walt Disney released the classic Steamboat Willie which is often thought of as the first animated short with sound. But Fleischer had been creating cartoons with sound since 1925.

As animated shorts became more common, Fleischer Studios continued to develop properties such as Betty Boop, Popeye the Sailor, and Superman. But in 1937 when Disney released Snow White and the Seven Dwarfs, Fleischer was finally granted permission to produce a feature-length animated film of his own. It took two years to produce Gulliver’s Travels. Though it ran over budget and made some money domestically, it wasn’t quite the success they were looking for and eventually led to Fleischer Studios being absorbed by Paramount Studios.

I would really like to know why I have never seen this movie. I have seen many of Fleischer’s cartoons. But to miss something the size and significance of Gulliver’s Travels is beyond me. Evidently the movie is now in the public domain and therefore has resurfaced on DVD and I am very thankful it has reappeared.

Gulliver’s Travels is of course based on Swift’s story of sailor Lemuel Gulliver. Gulliver has numerous adventures in the book, starting with being shipwrecked and visiting the land of Lilliput. This is the story that Fleischer focused on for his animated feature. Gulliver washes up on the shore of a strange island after his ship goes down during a storm. When he awakes, he has been taken prisoner by the island’s tiny inhabitants and finds himself in the middle of a war.

The war is between the Kingdom of Lilliput, ruled by King Little, and the Kingdom of Blefuscu, ruled by King Bombo. Their children, Princess Glory of Lilliput and Prince David of Belfuscu, are about to be married. However, the Kings disagree over which song should be sung at the wedding. Little wants “Faithful” and Bombo wants “Forever.” The argument leads to war.

Initially captured by the Lilliputians, Gulliver knew he was never in any real danger. He even came to like and trust the little people and vowed to help them during their war. But when Gulliver discovers that the war is over these songs and he has heard them both, he recommends that the Prince and Princess sing them together as a duet. With the song whole again, the war ends and the Kings make peace.

In typcial Max Fleicher style, the Lilliputians and their counterparts and even Gulliver are hand drawn by the many, many people working at his studios at the time. And each character and even the setting have their own personality.

Included on the DVD are several extras, including two short cartoons featuring the character Gabby from the film – “Swing Cleaning” and “King for a Day” – as well as a short documentary on “The Making of a Cartoon” at Fleischer Studios.

The documentary was fascinating. I have a whole new respect for the cartoons drawn during this early age of animation. The process is huge and the studio appeared to have legions of people at the time to create each cartoon a step at a time and capture it on film frame by frame.

The amazing thing to me is that after all these years, the picture has kept its value. I watched with my two daughters and even my youngest (age 4) was glued to the movie to see if the Princess would stop being sad and if Gulliver would make it home. We give it a definite 3 out of 4 stars.

If you are a fan of early cartoons, Max Fleischer’s Gulliver’s Travels is a classic that you should see. Definitely one of Fleischer Studio’s finest.

p.s. Pick it up at your local rental or movie store or online at Amazon and be sure to read the book too – it’s a classic!