It’s rare to find a remake of a movie that has the innocence and charm of the original yet gives the new material its own spin. The original came out in 2008 as a Swedish film. And after enjoying the original Let the Right One In, subtitles and all, I have to admit I was a bit leery when I heard they were remaking it. 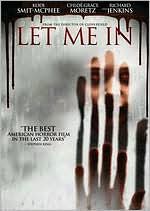 The film was based on a book by Swedish author John Ajvide Lindqvist called Let the Right One In which focuses on two characters – Oskar, a 12-year old boy bullied at school, and Eli, a 12-year old girl who moves into Oskar’s apartment complex with an older man. Eli turns out to be more than she appears and is in fact a vampire. The story is less about the vampire however and more about the trials of growing up.

The concept of a vampire who looks like a child is not new. Claudia, a vampire cursed to live forever in the body of a six-year old girl, was introduced in Interview with the Vampire by Anne Rice and in the rest of Rice’s Vampire Chronicles. Though her body didn’t age, her mind did, causing her eternal torments as she discovered all the things she’d never be able to do as a grown woman. I have to wonder if Eli was similarly tortured by her timelessness.

Though we never saw the original on the big screen, we did see it on DVD soon after it was released. I recall being surprised at how effortlessly it merged horror with adolescence while putting a modern spin on the vampire myth. So when Let Me In was announced as a remake of the original, I knew I’d be alone watching it. I heard from other reviews that it was basically a shot-for-shot remake of the earlier film, which made me even more nervous.

The American version, adapted for the screen from the original book and directed by Matt Reeves (Cloverfield), revolves around the same two characters. This time they are named Owen (Kodi Smit-McPhee, The Road) and Abby (Chloe Moretz, Kick-Ass and 500 Days of Summer, Diary of a Wimpy Kid). The film also stars Richard Jenkins (Step Brothers, Eat Pray Love, The Kingdom) as the older man accompanying Abby when she moves in and Elias Koteas (Shutter Island, The Fourth Kind) as a Los Alamos, NM, policeman investigating the strange murders in town.

To be honest, if I’d never seen the original film, I think I would have been more blown away by Let Me In. That said, I was extremely impressed by the subtleties and restraint shown in the production. Unlike some remakes of foreign films (anyone remember La Femme Nikita and the horrific remake Point of No Return?), this movie avoided all the traps of overemphasizing the wrong parts of what made the original good in the first place.

I was also impressed by the two young leads. Smit-McPhee did an amazing job as the awkward kid Owen, showing great emotional depth at such a young age. And after only seeing Moretz as a sarcastic sister (in 500 Days of Summer) or a tough, cocky superhero (Kick-Ass), she proved that she also has untapped depth as an actress. As a pair, they had great chemistry on screen.

From a special effects standpoint, the few SFX shots that stood out made the rest seem very seamless. Any time we saw Abby in vamp-mode running, jumping, or climbing it seemed a bit artificial. But the prosthetics and makeup used to transform her into a blood-sucking monster were subtly done, making her scenes that much more believable. The shot where they crash the car with Jenkins’ character as it rolls down a hill was so perfect I had to watch the “Car Crash Sequence Step-by-Step” feature on the DVD to figure out how they did it. And I’m still shocked they merged the three separate sequences into one smooth segment as well as they did.

Several other features were also included on the disc. “From the Inside: A Look at the Making of Let Me In,” which offered behind the scenes footage and commentary from the producers and director all the way down to the actors. “The Art of Special Effects” went into the many CG and physical effects done for the production. Three deleted scenes are available, including “Be Me,” which offers some insight into how Abby became a vampire in a violent altercation with her sire.

Let Me In has to be one of the most elegant horror films I’ve seen in recent years. As I said before, if I hadn’t seen the original film I think this would have had a bit more punch. However, the cast and crew did an amazing job of making sure the material was treated right. I love both versions of the film equally. If you’re looking for a great horror flick that plays on some of the terrors of adolescence, definitely check out Let Me In on DVD.

p.s. Pick up this movie and others below! 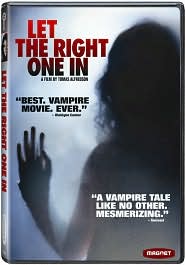