Yes, you read that title correctly – Krod Mandoon and the Flaming Sword of Fire. Is it redundant? Isn’t a “Sword of Fire” typically “Flaming”? Probably. But for a comedy action adventure set in a strange fantasy land oppressed by an evil ruler, you probably need just a touch of redundancy. 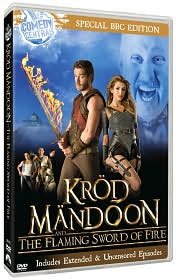 Though Krod Mandoon only lasted 6 episodes, I watched them all when they aired on Comedy Central starting in April 2009. My wife thought I was crazy. And undoubtedly I probably am. But I enjoyed this strange, off-kilter show with a kind of sick glee each time a new episode aired.

Now you can find all the episodes, plus some great bonuses on a new DVD from Comedy Central.

The series follows the exploits of hero Kröd Mändoon (Sean Maguire) as he and his band of freedom fighters struggle against the evil ruler Chancellor Dongalor (Matt Lucas). Accompanying Kröd in his quest are his “girlfriend” – the beautiful pagan warrior Aneka (India de Beaufort), his servant – a Grobble (sort of like a pig/man combination) named Loquasto (Steve Speirs), a young warlock who’s true strength is the power of BS named Zezelryck (Kevin Hart), and the Gay lover of Kröd’s mentor General Arcadius – Bruce (Marques Ray). The evil Chancellor also has a few team members helping his along on his quest of world domination – the always loyal Barnabus (Alex MacQueen) who tries mightily to guide Dongalor to better decisions, but is often ignored; and the love of Donaglor’s life – “Cute Girl” (Remie Purtill-Clarke) – a concubine taken when Dongalor killed her father to prove a point.

Yes, it’s a rather strange cast of characters. But as someone who has enjoyed playing games such as Dungeons and Dragons over the years, I have to say it’s probably not the most bizarre party I’ve ever seen. And as a gamer, this show plays on many of the various themes and plot twists we find regularly in our gaming sessions.

Through the six episodes (a one hour premiere and five thirty minute shows), we see Kröd and Dongalor stumble through situation after situation until the plot comes to a head. We learn more about Kröd’s relationship with the pagan Aneka. Aneka isn’t a one-man kind of girl and resists being tied down to Kröd, but that doesn’t stop Kröd from trying to change her mind. The “Resistance” was led by General Arcadius until his death, but now looks to Kröd and the resistance ruling council for direction. And all along, Chancellor Dongalor has been assembling the deadly Eye of Gulga Grymna – an ancient weapon of immense power – and he wants to eradicate the resistance once and for all…

Honestly if you’re not a fan of Monty Python, Mel Brooks, or the group behind movies like Scary Movie, you probably won’t enjoy the humor. It gets pretty sophomoric in places, including many visual references to genitalia and sexual relations throughout the series. But if you like that sort of thing (and I have to admit I do if it’s done well), there are a lot of very funny scenes – especially when you get to “O Biclops, Where Art Thou?” The whole bisexual cyclops twist had me in stitches for quite a while.

Also included on the DVD are several special features. Among them I found the “Behind the Scenes with Kevin Hart”, the “Outtakes,” and the “Cast Interviews” enlightening to see and hear more about what went on during production. The interviews were especially interesting, since I had no idea Sean Maguire was British!

If you like sexual humor, raunchy sight gags, and stereotype-based humor, you’ll probably like the series and should check out Krod Mandoon and the Flaming Sword of Fire on DVD at your favorite rental or retail counter. But it won’t be for everybody.

p.s. Pick up Krod Mandoon and the Flaming Sword of Fire below!