Wow. I was expecting… well, honestly I don’t know what I was expecting. This is not the Jean-Claude Van Damme I grew up watching as a kid. Bloodsport, Lionheart, Double Impact, Hard Target… the list seems endless. He was a busy, busy action star in the 1980s.

JCVD strips all of that action star glitz and glamour away to provide us with a movie about an old action movie actor tired of the roles that keep coming his way and wanting a bit of normalcy in his life. 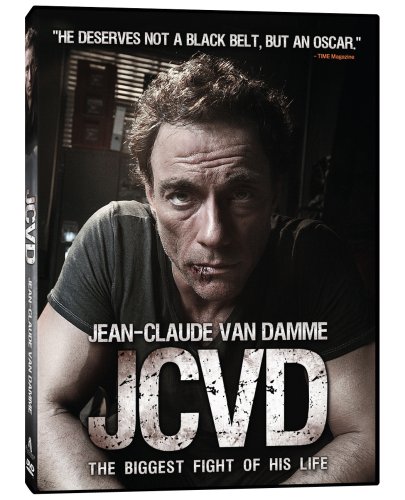 When I started the film, I was surprised to see that the whole film was in French with English subtitles. Again, I don’t know what I was expecting, but after seeing Van Damme in so many American films, I thought the movie would be in English. However, the subtitles did not make the film harder to understand. The French language is very expressive and emotional, so the timbre and pace of speech told the parts of the dialogue that the subtitles could not.

A couple of things I will mention about the production of the film itself before I talk a bit about the story… The camera work was very smooth when it needed to be. They trollied a camera throughout the interior of the post office quite a bit and I never found it distracting. It was simply another way to help tell the story. And second, the music was excellent. Unlike some films where it is an afterthought, the music added to the emotional impact of the story but never got in the way.

The story on the other hand, I’m not quite sure what the writers and director were going for. Though I liked the police inspector running the investigation from the video rental store across the street from the police station, he was the only character who really made a difference to me beyond Van Damme himself.

The idea that Van Damme would let himself be trapped in a situation like this is an interesting thought experiment that didn’t work until we hit the last 30 minutes. The first hour was slow, plodding, and almost impossible to watch. But something miraculous happens in the last half hour. Van Damme addresses the camera in a soliloquy of sorts, and from that point on I was hooked. It’s not the action that hooked me. It was the pathos – the raw emotion that Van Damme portrayed.

In my opinion, the last 30 minutes of the film proved that Van Damme can act. This was a similar revelation to watching Jet Li in Danny the Dog (also called Unleashed). Yes, Van Damme is a heck of an action movie star. But he seemed to be playing the same role for the most part. It’s like Kevin Costner… Costner in Robin Hood: Prince of Thieves was Costner playing Costner playing Robin Hood. Van Damme always hit me the same way. Stoic, impossible to read, and always ready to kick some butt.

But JCVD showed a glimmer of hope. Now maybe we can see what else he can do. Jet Li hasn’t really done much that’s wowed me since Unleashed, but I’m hoping that Van Damme goes the extra mile.

After its premiere at the 2008 Cannes and Toronto Film Festival, JCVD garnered much praise from the media. Richard Corliss of Time Magazine said “he deserves not a black belt, but an Oscar.” And Ty Burr of the Boston Globe said the film “forces you to consider the star in a whole new light.” And from Van Damme’s performance in that last half hour, I’d have to agree with Burr.

In addition to the movie on the DVD are a few extras.

The DVD includes a digital copy of the film in a computer-accessible folder on the disc itself. This is nice because it’s all on one disc and you don’t have to go to a second disc to get the digital file.

Also included are several deleted scenes that the disc provides both with and without English subtitles.

The first is an extension of the scene where one of the robbers in the post office asks Van Damme to do the famous move where he kicks a cigarette out of a guy’s mouth. Of course he does it quickly and with style, but then the robber wants to try. And he succeeds in the deleted scene, but ends up on the floor!

The second helps explain parts of Van Damme’s soliloquy in the film, where he talks about being “aware” and having the answer before the question. I’m not sure why they cut the scene, as I thought it was another where Van Damme was actually acting and doing quite well. That boosted this from a 1 out of 4 star rating to a 2 1/2 star rating.

If you are a fan of Van Damme’s, JCVD provides a chance to see him in a completely different light. His acting in the last 30 minutes is worth the preceding 60 and proves that he should get some deeper roles before he retires from the limelight all together.

p.s. Check out JCVD out at your local video store or at Amazon: