In the world of movies that have gone straight to DVD, In the Electric Mist was a surprise. Typically a movie of this caliber would have at least had a limited release before a DVD release. Unfortunately, the only place this one was seen prior to its DVD debut was at the Berlin International Film Festival in February 2009.

Start with a dream cast… Tommy Lee Jones, John Goodman, Peter Sarsgaard, Kelly Macdonald, Mary Steenburgen, and Ned Beatty. Add an amazing script penned by Jerzy Kromolowski and Mary Olson-Kromolowski, based on the novel In the Electric Mist with Confederate Dead by James Lee Burke. And you end up with a movie that defies expectations. 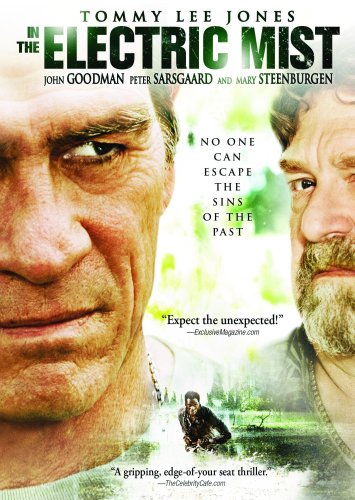 The title, In the Electric Mist would not have been enough to get my attention had I seen this appear on the new releases page of Netflix. And even the cast may not have peaked my interest. But it’s simply one of the best movies I’ve seen, on DVD or in the theater, so far in 2009.

As Louisiana detective Dave Robicheaux (Jones) investigates a horrific murder of a number of women, the ghosts of the past begin to rise up and tangle the feet of the living. Robicheaux knows New Orleans mobster “Baby Feet” Balboni (Goodman) is somehow at the center of it all, but is quickly drawn into a simple, yet intricate plot begun 40 years earlier in darker days of Louisiana.

From the opening narration spoken by Robicheaux to the closing narration, I found the story compelling in a post-Katrina New Orleans. Only a few scenes showed the remaining devastation left in the hurricane’s path, but New Orleans and its countryside were a heck of a backdrop to the movie. And how can you have a movie set in New Orleans without amazing music? The soundtrack does not disappoint.

Robicheaux’ character is an alcoholic who still fights the urge sometimes for a drink and still attends regular AA meetings with some of his cop buddies. But, like all roles for Tommy Lee Jones, Robicheaux seems to cut through the bull and get to the heart of the problem quickly — sometimes stepping on people in the process. And if that weren’t enough, the swamps of Louisiana are home to many ghosts, including those from the civil war. The South does rise again during this film, which gives voice to the past of which some are still reluctant to speak. As always, it catches up with Robicheaux and the other characters in the film.

Caught in the crossfire are Elrod Sykes (Sarsgaard) and Kelly Drummond (Macdonald), actors in a movie being filmed in New Orleans about the Civil War. Sykes relies on drugs, alcohol, and Drummond to help him get through his days. And when she’s suddenly not there, he finds himself again with the help of Robicheaux’ daughter Alafair (newcomer Alana Locke). I think in some respects, Sarsgaard and Macdonald were thrust into the background by the scene-stealing Jones and Goodman.

Steenburgen plays Robicheaux’ wife, Bootsie, in an understated yet powerful role as a strong female character who only wants to protect her husband and family from the world Robicheaux sometimes brings home. It was nice to see Jones paired with an actress used to playing against strong leading men.

I found many of my favorite scenes in the movie involved General John Bell Hood (Levon Helm) and Robicheaux. The eerie simplicity and familiarity with which Robicheaux travels in both the present and the past was remarkable. And Hood has some of the most poignant lines in the entire movie.

In the Electric Mist is a movie that will stick with me for quite a while. I’m shocked that it wasn’t released more widely on the big screen. However, I’m glad I had an opportunity to watch it, and I hope you do too!

This gets a solid four out of four for me. It’s definitely worth seeing.

p.s. Check it out at your local video store or pick it up at Amazon: