The Ice Age movie series started back in 2002 with the first movie by Blue Sky Studios. It featured Manny the Mammoth (Ray Romano), Sid the Sloth (John Leguizamo), and Diego the Sabertooth Tiger (Denis Leary) trying to survive and evade the coming ice age. As Sid is often fond of saying, they are the world’s weirdest herd. Also included were the continuing misadventures of Scrat, a sabertoothed squirrel, and his attempts to find all the acorns. 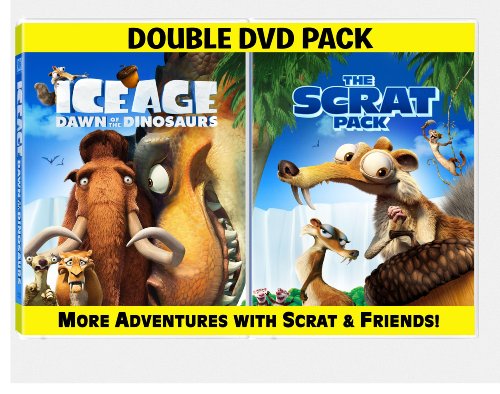 In 2006, the series continued with Ice Age: The Meltdown. The herd continues to get weirder as they encounter Ellie (Queen Latifah), another mammoth, and her two “brothers” – opossums Crash (Seann William Scott) and Eddie (Josh Peck). Ellie was adopted by the opossums and just came to believe she was one, as she had never encountered another mammoth before meeting Manny. Sid meanwhile is kidnapped by a tribe of mini-sloths who believe him to be a god, which doesn’t turn out well. And we discover that Diego is afraid of water. Scrat makes another appearance in The Meltdown, chasing down his acorn, fighting off giant piranha, and generally having a miserable time.

And in the summer of 2009, we saw the third sequel called Ice Age: Dawn of the Dinosaurs. Now Ellie and Manny are a couple expecting a baby mammoth any day now and Diego and Sid are wondering where they fit into the equation. Scrat is back as well, but he finds a new challenger who wants his acorn – Scratte. Who wins that battle? The acorn of course!

In Dawn of the Dinosaurs, Sid discovers three eggs he finds in a cave. He calls them Eggbert, Shelly, and Yoko and draws a face on each. Though told to put them back by Manny, Sid keeps them and they hatch the next morning into baby Tyrannosaurus who think Sid is their mother. Unfortunately, the babies’ real mother goes looking for her eggs and herds her new hatchlings and Sid down into a huge underground world filled with prehistoric beasties.

Manny, the pregnant Ellie, Diego, Crash, and Eddie all head into the caves to find and rescue Sid. Once in the dinosaur paradise, they’re helped by Buck (Simon Pegg), a one-eyed weasel living a life of adventure in this hidden prehistoric world. Buck is a bit off his rocker, but knows his way around many of the dangers facing Sid’s would-be-rescuers and proves very resourceful despite his obvious lunatic nature.

Honestly, when we saw Dawn of the Dinosaurs in the theater I was sure that I liked this movie better than The Meltdown. There’s a magical spark when you see these characters fighting to stay a family amidst all odds. And after seeing the film again on DVD, I still think this was better than the second sequel. The perils faced by the “herd” led each character to face their own fears and triumph to save their friends. I can hardly think of a better message than that for the young audiences the movie was meant for.

The “Scrat Pack” also included a second DVD with 11 short features about Scrat and a few DVD-ROM activities.

As huge fans of Scrat, we really were looking forward to the features we hadn’t seen. The two Scrat short films – “Gone Nutty – Scrat’s Missing Adventure” and “No Time For Nuts” were both hilarious, pitting the insane prehistoric rodent against his nemesis, the ever-present acorn. In “Gone Nutty,” we see what happens when Scrat has too much of a good thing and loses his acorn supply. The freefall segment with Scrat and the falling acorns is just brilliant. And in “No Time for Nuts,” Scrat and the acorn go on an adventure through time and space with a device resembling something from a Jules Verne novel. As always, things don’t go well for Scrat as he bounces through various periods in history.

We also liked “Falling for Scratte,” which focused on the development of the Scatte character and how they found the voice among the talent in their own crew. The interview with Pegg about Buck, “Buck: From Easel to Weasel,” was also entertaining as they discussed how they ended up with Buck as a character. And learning how to draw Scrat in “Scrat: From Head to Toe” was great. I’m sure my eldest daughter, an aspiring artist, will be drawing the little nutty critter in no time.

Some of the rest of the Scrat shorts on the DVD however fell a bit flat. But the fake news reports like “Scrat: Breaking Story” and “Scrat: News Report” tried very hard to be funny. Scrat just doesn’t really belong in newsreel-type footage.

p.s. Pick up this and other Ice Age movies below! 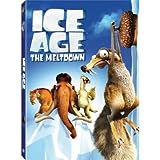