Grave robbing. These days it doesn’t happen much. But in the 19th century it was a booming business, even if it was highly illegal. For writer/director Glenn McQuaid’s directorial debut, I have to say though the setting and story were in a horror style, it was the comedy that shined through for me. For a first-time director, it was top-notch.

I Sell the Dead follows the path of Arthur Blake, a 19th century historical figure known to steal bodies from cemeteries and coffins throughout England until his eventual capture. In the movie, Blake (played by Dominic Monaghan of The Lord of the Rings, Lost, and Flash Forward) decides to weave a tale for the strange priest, Father Duffy (Ron Perlman of Hellboy and Sons of Anarchy) who comes to talk to him before his hanging. Add to that the unique character of Willie Grimes (Larry Fessenden, who also produced the film), the body thief who trains young Angus in the art of body snatching, and Dr. Vernon Quint (Angus Scrimm of Phantasm fame), the doctor for whom Angus and Willie steal the bodies… It’s a unique cast.

However, the strange non-supernatural characters like Dr. Quint and Father Duffy are only part of the equation. When corpses run low due to better security measures, you start getting more creative in where you look for bodies. What happens when you encounter a good looking corpse stabbed with a stake through the heart? Do you remove it to take the body to the good Dr. giving you so many problems? Or what happens when you encounter strange creatures that like to eat your flesh and don’t react quite the same way living things do when you chop off their limbs…

The horror bits were balanced out with the gallows humor throughout the production. It seemed more in the spirit of Evil Dead than a serious film. Don’t let that stop you from watching though – there’s plenty of blood and violence to go around.

Included with the DVD is an I Sell the Dead comic book that follows the story as well, in a slightly more artistic fashion. That said, the special effects in the movie were perfect. Understated in many places, but just enough so that when certain things happen later on (like the slitting of a throat or stabbing in the forehead) they have a bit more shock value.

In addition, you get two bonuses on the DVD – “The Making of I SELL THE DEAD” and “Visual Effects Behind the Scenes.”

According to “The Making of…”, the film was shot in New York, and there was an incredible amount of work that went into simply getting ready to shoot. The props alone must have taken weeks of preparation. Filming on location as opposed to on a controlled set makes things much more challenging to do, but obviously the cast and crew had a good time and worked hard to make the film great!

And in “Visual Effects Behind the Scenes” you get a chance to see how they took the location-shot footage and introduced computerized effects to fill in the blanks (like Willie holding his disembodied head in his hand during one scene). Storyboarding and 3D computerized animatics made it easier to try and plan for the unexpected, but it’s fascinating to see scenes progress from drawings to cartoons to live action in the movie.

IFC Films has released two of my favorite films in recent months on DVD – Dead Snow and now I Sell the Dead. Who can pass up a horror-comedy about zombies OR grave robbers? Be sure to check them out at your favorite retail or rental counter.

p.s. Check out this film and others at Barnes and Noble! 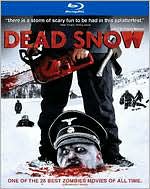