Growing up as a child in the 1980s, Leslie Nielsen was a comedy genius. With signature roles in such classic comedies as Airplane! and The Naked Gun: From the Files of Police Squad!, he will forever echo in my brain with such lines as “I am serious. And don’t call me Shirley.” and “Can I interest you in a night cap? / No, thank you. I don’t wear them.”

So when Paramount started re-releasing classic 80s movies on DVD, I had to revisit The Naked Gun: From the Files of Police Squad!. What’s amazing to me is how much of the film still works after 21 years. The Zucker brothers and Leslie Nielsen were a combo made in slapstick heaven and most of the film aged really well. 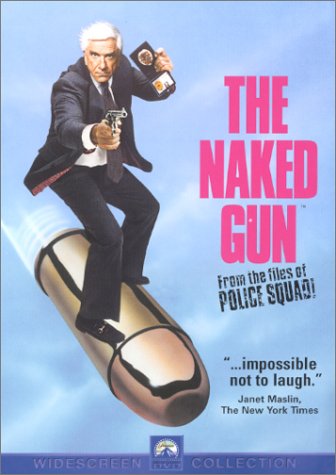 For those of you who don’t know the movie, The Naked Gun is the story of Lieutenant Frank Drebbin (Nielsen) as he tries to stop a plot to assassinate Queen Elizabeth II during a visit to the United States. Drebin is a klutz who somehow manages to stay alive and save the day, regardless of how much madness and mayhem he causes along the way.

The Zucker brothers relied on sight gags and one-liners to create a parody of all the police movies and television shows of the era.

Some of the lines in the movie still make me break into giggles, such as “Nice Beaver. / Thanks, I just had it stuffed.” as the stuffed and mounted beaver is passed down the stairs or ” It’s true what they say: Cops and women don’t mix. It’s like eating a spoonful of Drano; sure, it’ll clean you out, but it’ll leave you hollow inside.” Many of the lines from the movie found their way into everyday conversation for me in college (yes, I was and am still a geek), so there are many fun memories attached to the film for me.

I have to admit I was worried a bit in spots. For example, the opening sequence, with Khadafi, Khomeini, Gorbachev, Idi Amin and other terrorist leaders of the time still works, but it dates the movie quickly. These days it would be Kim Jong-Il, Osama Bin Laden, Ahmadinejad, and who knows who else sitting around the table. So it’s not too far off.

But overall, I thought the movie held up remarkably well. Seeing Ricardo Montalban alive and smiling as only he could do was great. And O.J. Simpson was in the film, back when he was funny and before the whole “glove” incident. Who knew he’d cause so much trouble over the next 20 years?

Even now, I still have to give this movie three out of four stars. It’s a classic!

If you like slapstick, The Naked Gun: From the Files of Police Squad! is a must have for your movie collection. Watch as Lt. Frank Drebin stumbles his way through a case and giggle yourself silly. I know I did!

p.s. Pick up this and the other Naked Gun films at Amazon!