Since I saw Simon Pegg in Shaun of the Dead, I’ve been a fan. That said, I was a little concerned when I saw his name associated with a romantic comedy by the name of How to Lose Friends & Alienate People last year. I now know I should not have been concerned. 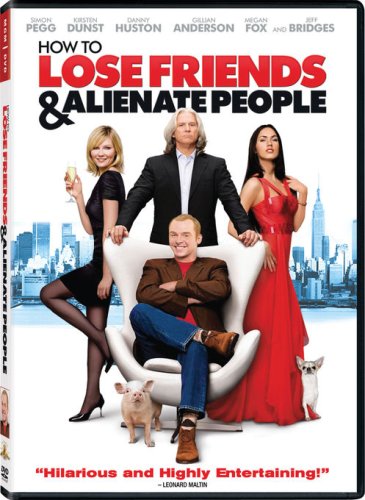 How to Lose Friends is the story of entertainment reporter Sidney Young (Simon Pegg) and his quest to become one of the “in” crowd. And, as sometimes happens, when he reaches his mythical Shangri-La, he discovers that maybe things aren’t all that they were cracked up to be.

In England, Young worked as a reporter for “Post Modern Review,” which seems to be an entertainment gossip magazine specializing in bad mouthing celebrities. In the process, Young was thrown out of nearly every establishment he squirmed his way into to get interviews with famous people.

One day after Young was thrown out of a post-BAFTA party that made the news, he gets a call from big time magazine editor Clayton Harding (Jeff Bridges) from Sharps magazine in the United States. When Harding offers Young a job on his magazine in New York City, he jumps at the chance.

However, as we all find out eventually, the grass is not always greener on the other side. As an outsider, Young is treated with derision by not only his management, but his coworkers as well. Everyone that is except for Alison Olsen (Kirsten Dunst), another writer at the magazine who befriends him. But Sidney’s work life is more than a bit rocky as he becomes infatuated with actress Sophie Maes (Megan Fox), annoys her publicist Eleanor (Gillian Anderson), and tries to become relevant in the new world he finds himself in.

How to Lose Friends is a great blend of romance and comedy all tied up with a bow on top. When it was initially advertised during its theater run, I found the trailers to be more than a bit snarky and misleading, which made me not want to see it. But when you actually sit down and watch the film, it reveals itself to be a romantic comedy at its core with great characters going through their own transformative processes.

The relationship between Pegg and Dunst’s characters develops very gradually from a chance meeting in a bar to finally realizing that they love each other. Both characters have depth, which is something I haven’t seen in a romantic comedy for a while.

Pegg’s Sidney is a broken man seeking his own Holy Grail of crass reporting. He has a past that you don’t fully understand until about 3/4 of the way through the film when you meet his father, sucessful writer Richard Young (played in a wonderfully understated way by Bill Paterson).

And Dunst’s character is a girl from a small town in Michigan just trying to make it in the big city so she can publish her novel. Somewhere along the path she lost her way, and spends the movie trying to find it again.

As for the other actors, it was a bit hit and miss for me. We’ve all seen Jeff Bridges in this type of role before, in a position of power, so it wasn’t surprising that he pulled off the eccentric editor character well. I was however surprised to see Gillian Anderson pull off a woman inflated by her own sense of importance and thought she played Eleanor quite well. This is a far cry from her role as Sully on the X-Files. And Megan Fox, though beautiful, isn’t what I consider a great actress. That said, she played the shallow, stereotypical young starlet Sophie quite well.

Overall, the story worked very well for me. Pegg’s comic timing never got the story too far off track and the we were guided back to the main plot without much effort. I credit director Robert B. Weide and screenwriter Peter Straughan for creating a fun movie from Toby Young‘s book.

The DVD itself includes a few extras, but I want to talk about the DVD menus first. It’s rare that a DVD’s menus actually make me stand up and take notice. Usually they are minimal or utilitarian and nothing more, but the menus for How to Lose Friends are laid out as a series of magazine covers with pictures of the cast, which blends style and function beautifully without getting you lost in the process.

Along with the movie, there are two tracks of audio commentary — one with director Weide and Simon Pegg, and the other just with Weide.

A “Making of Featurette” was filmed as a set of interviews with the cast and crew. The director, producer, screenwriter, and actors speak at length about the work of taking the story and turning it into a movie with a main character like Sidney, who isn’t the most likeable fellow at first. It really fell to screenwriter Straughan and actor Simon Pegg to make Sidney more sympathetic so we are willing to tag along on his journey.

In addition, there are two trailers – one for Choke and the other for Slumdog Millionaire.

This is definitely an R rated movie for the language and some graphic nudity, so I wouldn’t recommend it for family viewing. But if you’re looking for a good, funny romantic comedy, I give this one a solid 3 out of 4 stars and highly recommend you check out How to Lose Friends & Alienate People at your local video store!

p.s. Pick it up locally or from Amazon!