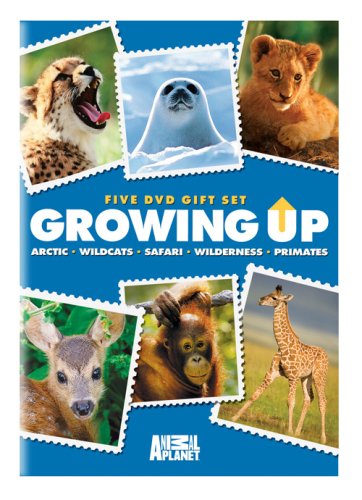 Before reviewing this DVD set, I had not seen this series before (and we tend to watch a lot of Animal Planet at my house), but each episode is constructed such that you don’t need to have seen any previous episodes to enjoy one. The production values are great, interspersing stories of the animals with stories of the caregivers.

Each DVD provides four 43-minute episodes of the top-rated Animal Planet series. Each episode follows a baby animal’s journey from baby to adulthood, as well as introducing us to some of the best zoos and animal sanctuaries from around the world and the people who work in them.

“Growing Up Arctic” features four episodes about stranded, orphaned, or endangered arctic animals. “Growing Up Walrus” features an orphaned baby walrus and his eventual trip to the Indianapolis Zoo, thousands of miles from the Alaskan beach where he was found. “Growing Up Polar Bear” focuses on a baby polar bear found after his mother and sibling were killed by hunters. “Growing Up Seal” takes a look at some of the rescued seals given a second chance at the Alaska Sealife Center in Seward. And “Growing Up Penguin” documents the story of an endangered Humboldt penguin from egg to adulthood at the Oregon Zoo.

Each of these stories pulls at your heart strings as you hope that they not only find the strength to survive, but to thrive in the wild or in captivity. And each story introduces us to dedicated veterinarians, technicians, and caregivers that help the animals along the way.

“Growing Up Wildcats” contains episodes about Lions and Tigers in Texas, Cheetahs in South Africa, and a Black Leopard in Colorado. Carol and Ron Asvestas own the Wild Animal Orphanage near San Antonio, Texas, and spent a year raising four lion cubs. Beautiful animals facing their share of joys and challenges, including being sick. But this pride survives. So do the tiger cubs Sarge and Lily at the Tiger Creek Wildlife Refuge near Tyler, Texas. Brian Werner and Terri block maintain this home for Sarge and Lily as well as 28 other tigers, lions, and other big cats rescued from unfortunate circumstances. In South Africa, cheetah cubs at South Africa’s Cango Wildlife Ranch Cheetah Breeding Center, grow up with a dog and a keeper on the ranch as the Center tries to repopulate this disappearing animal. And finally, Edie Falco from The Sopranos introduces us to an African black leopard named Eddy that was rejected by his mom at a sanctuary in Colorado. His human caregivers must support him and give him the skills to survive in close contact with other big cats.

“Growing Up Safari” introduces us to baby rhinos and zebras, an orphaned giraffe, and even a hyena! We visit Pretoria, South Africa where two orphaned baby rhinos grow and face a mysterious illness. And baby zebras are raised to be reintroduced into the African wilds. In California, an orphaned giraffe is raised to be introduced into the sanctuary’s herd. And finally, hyenas are misunderstood and feared beasts. One man thinks they should be respected more than vilified.

“Growing Up Wilderness” shows stories about wolves and black bears in Minnesota, deer in Alaska, and moose in Quebec. All of these animals are given a chance to survive in captivity or in the wild as caregivers do their best to help them adjust to the circumstances of their very lives.

And “Growing Up Primates”, a bonus disc, tells the tales of baby orangutans, as well as orphaned gorillas and baboons. From Africa to Borneo, caregivers do their best to keep these animals breeding and alive.

If you have an animal lover in your house, Growing Up – Five DVD Gift Set would be a great gift for the holidays. Hours of amazing stories from orphaned arctic seals, tiger cubs, rhinos, wolves, and an orphaned gorilla to name a few. Be sure to check it out!

p.s. Be sure to pick up this DVD set from Amazon!