William Shatner. The name alone evokes many memories for me. Star Trek mostly, with some Airplane: The Sequel and Tek War thrown in for good measure. He’s been in the movie and television industry forever, but has also been attached to a number of book projects over the years and had a director credit on Star Trek V: The Final Frontier way back when… 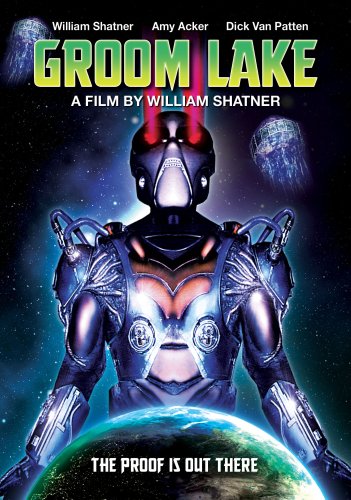 Little did I know that after the passing of his first wife he was inspired to write a story about aliens and everlasting love. In 2002, his story was adopted for the screen by Maurice Hurley and they started producing Groom Lake on a shoestring budget in the deserts of southeastern Arizona.

“Groom Lake” is one of the many names with the fabled Area 51, which has forever been associated with the US Military and top-secret research into aliens and UFO technologies. For years there have been UFO sightings associated with different parts of the country such as McCarran Airport and Area 51 in Nevada, Roswell in New Mexico, and elsewhere.

In the movie Groom Lake, the story is about Kate (Amy Acker) and her husband Andy (Dan Gauthier) as they go on an adventure to prove the existence of extra terrestrials. Kate, dying of a terminal illness, is trying to reconcile the practical “see it/believe it” philosophy of her husband with her own need to believe in something more – like Heaven or life on other worlds – something to reinforce the feeling that mankind will not simply disappear when the sun explodes in a few million years.

The couple was amused by the eccentricities of the townspeople living on the edge of a military base near Groom Lake. But they never thought they’d be wrapped up in the madness of UFO sightings and strange behavior of the alien-crazed people watching. In the end though, Kate gets the answer she was looking for.

In addition to Acker (Angel and Dollhouse) and Gauthier (All My Children, One Life to Live, and more), Shatner recruited friends to help with the film, including Dick Van Patten (Eight is Enough) who played a scientist on the base.

When you watch this film, it’s very easy to giggle at some of the camera work and special effects. But on the minimal budget they had, I think it’s on par with many of the less than great movies that appear on the SciFi Channel on Saturday nights. And they did this back in 2002, so they were ahead of the curve as far as B-movies went back then.

But when you watch the interview with Shatner that is the sole extra on the DVD, you begin to appreciate the monumental task of producing a movie on no budget, pulling in favors from friends and family, and just trying to get it done and in the can.

Is this a great movie? No, it’s not. But I can say I have a lot of respect for Shatner and his crew who worked on this picture. Though it’s not the best film, you have to admire the tenacity of the cast and crew.

If you’re a fan of William Shatner’s work and like B-movies, I recommend you check out Groom Lake at your local video rental store. I give it 2 out of 4… It would be 1 out of 4 if I didn’t appreciate the hard work and motivations that went into making this film.