George Carlin was a huge influence on my life. I’d never consider myself a comedian, but Carlin served as a comedian/philosopher showing not only that language can express thoughts, but that it can express the absurdities that exist in everyday life so we can see things for what they are (or at least closer to the truth) than how we perceive them initially. 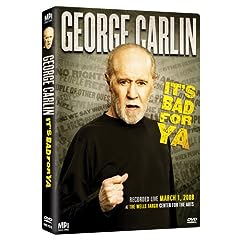 George’s death in June 2008 was a huge blow to comedy around the world. Carlin used free speech to his (and everybody else with a funny bone and a love of language) advantage. I won’t repeat his 7 words you can’t say on television, but it’s still one his most thought provoking routines. It’s not the words that are bad, it’s the intention or thoughts behind their use that’s the problem. What a concept.

I actually got to see him once in concert in Denver a few years ago with my wife. He was hilarious, vibrant, and bigger than life. I’m sure he’ll wow them wherever his spirit ended up, but we’ll have to content ourselves here with his old albums and TV specials. And it’s great for those of us left behind that he filmed another HBO special before he passed away.

It’s Bad For Ya was Carlin’s 14th and final HBO special filmed in March 2008. George has another amazing hour plus of observations about the digital life, getting old, dying, government, and raising children, among other things. And as per usual, George’s vision of what makes the world go around are slightly off from the rest of us. The title is the end of a sentence… “It’s all bullshit folks, and it’s bad for ya” which is the theme of the entire performance.

A great quote from his routine was “Bullshit is the glue that binds us as a nation.” And I have to admit he’s right. After all the political process to elect our next President, we’ve probably seen enough BS on television and radio to glue us together for another few years at least.

George has an entertaining view of crossing out dead people in an address book. There’s power there. But it’s changed now that everything’s online. When you delete a contact from your online address book, it goes into the desktop trash can — a “digital purgatory” if you will. If you really disliked the person, you can empty the trash right away. Or if you want to wait a while out of respect, you can do that too.

However, the best part of the show is the discussion of our rights and how they are actually imaginary. We made them up, like the Boogeyman. They’re an idea. It’s more like a privilege, like staying up late to watch television. And they can be suspended at any time. Just ask the Japanese Americans during World War II in 1942.

This is another amazing stream of thoughtful observations about life, the universe, and everything from a comedian philosopher whose work will hopefully survive forever.

Beyond the special itself on the DVD, there are two amazing extras.

The first is “Too Hip for the Room,” which was a half hour interview with George Carlin. He’d like “He was just here a minute ago” or “too hip for the room” on his tombstone. It’s a great glimpse into what made him what he was — a brilliant man with a unique perspective on the world from the 1960s until his death in 2008. He uses his jokes to illustrate what he doesn’t like about the world.

George will be forever missed, but he’s left a long legacy of comedy that we will have at our disposal.

We miss ya George. There’s too much BS here without you.

p.s. Be sure to pick this up at Amazon or rent it via Netflix or at your local video store!