Ok, it’s time to come clean on this one. G-FORCE found its way onto the big screen from Walt Disney Pictures in July 2009. The “G” in this case stands for guinea pigs. Not just any guinea pigs, but computer-generated, talking guinea pigs who were trained to be FBI Special Agents. And did I mention the mole in the group? Yes, there’s a mole. And a fly with electronic surveillance capabilities literally turning him into a “fly on the wall…”

Who was this movie meant for? Kids. The trailers made no bones about it when they were promoting the film for the theater and I won’t deny it here either. When one of the most memorable lines in the movie is “Poop in his hand! Poop in his hand!” spoken in unison by a group of not-so-bright mice in a pet store, it leaves little room for doubt. My two girls (ages 4 and 8) begged to see it in the theater and we eventually picked it up to watch on DVD.

What’s Jerry Bruckheimer doing producing this kind of film when he could be working on improving the story for the next Transformers sequel? I haven’t a clue.

But back to G-Force. The plot revolves around this special group of trained animals who can talk and use fancy equipment in the line of duty. The team consists of Darwin (Sam Rockwell), Juarez (Penelope Cruz), Blaster (Tracy Morgan), Speckles (Nicolas Cage as the mole), and Mooch (the fly, Dee Bradley Baker). Their trainer who came up with the idea, Ben (Zach Galifinakis), sends the team out on an unsanctioned mission to retrieve sensitive information from a potentially evil mastermind – Leonard Saber (Bill Nighy). Though the team does manage to survive the mission, it’s considered unsuccessful when they discover that the data they thought they had wasn’t the right data at all…

When Agent Kip Killian (Wil Arnett) comes in to take a look at Ben’s operation, the failed mission becomes the excuse needed to shut the project down. In the chaos that occurs, the team becomes separated and loses Speckles, who is presumed dead in an accident involving a trash truck.

The rest of the movie explores the team as they try to figure out what went wrong and try to stop Saber’s evil plot for world domination. Along the way, they encounter Hurley (Jon Favreau) and Bucky (Steve Buscemi).

Really G-FORCE has a top-notch team of funny actors doing voices for these characters I really wanted to like – unfortunately it really dragged in spots. On the plus side, there was a saving grace at the end – a twist ending! None of us saw it coming and it actually made the ending much more satisfying than what I was predicting.

Was this a great film? Not really. Was it as horrible as I was expecting? Not really. It was fun in spots and boring in others, so I think it broke even. I know my kids really enjoyed it, which is always a good thing. And the pet store scenes were pretty dang funny (Buscemi is a major scene stealer). Definitely a good renter if you get a chance to see it.

The version of the DVD I watched came from the Blu-Ray + DVD + Digital Copy combo back, which provides a lot of bang for your buck. As someone looking at upgrading to Blu-Ray in the next year or so, I have to admit that I really like these Combo Packs from Disney and other manufacturers. They save me the trouble of having to purchase another copy of a film when I upgrade.

In addition to the movie itself, many special features are included on the discs. Some were on the Blu-ray – “Cine-Explore With Darwin, Blaster & Their Creator,” “Bruckheimer Animated: A Look Back at His CG Work,” and “Access Granted: Inside the Animation Lab.” Unfortunately, without a Blu-Ray player I was unable to view these.

However, the DVD included all the other features including audio commentary from director Hoyt H. Yeatman, Jr. and a number of fun bits. “Blaster’s Boot Camp” introduces you to the exciting world of the G-FORCE team, including the training and various toys used (grappling hook, launch tubes, and so on). “G-FORCE Mastermind” features interviews with Bruckheimer and director Yeatman about how the project came about. It was interesting to hear the son of the director talk about coming up with the idea that his dad turned into a feature film.

Of course, the “G-Farce” blooper reel has some great scenes, especially from Galifianakis and Morgan. The cast and crew seemed to have a great time filming, which I expected due to the many comedic personalities involved.

The Music Videos I could have done without, but I know my girls enjoyed dancing to the music. And some of the Deleted Scenes were hilarious. The “March of the Cockroaches” was my favorite, with the automated boots stomping in unison to prove how hard it was to kill the buggers… and accidentally killing one of them in the process!

Though I can’t say this is my favorite Disney film in recent years, G-FORCE definitely was a hit with the kids and had some funny parts. If you have kids, I’d recommend it as a solid renter for them over the holidays!

p.s. Be sure to look for G-FORCE at your favorite retailer or click below! 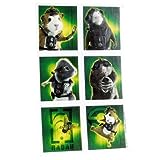 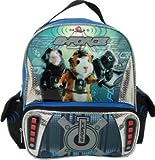