Forgetting Sarah Marshall was released to theaters on April 18, 2008, and just came to DVD at the end of September, so I’m just a little late reviewing this one. 🙂

This movie was written by and starred Jason Segel as Peter Bretter, who has to deal with his and his TV-star girlfriend’s (Sarah Marshall, played by Kristen Bell) break-up. To get over her, he decides to travel to Hawaii on a vacation to relax and regroup. Unfortunately, his ex happens to be there with her new boyfriend. 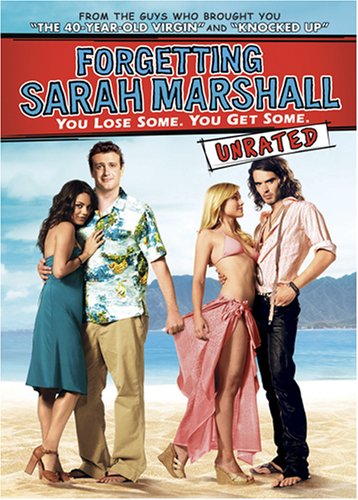 Now, I have to say that I didn’t watch this movie initially because it didn’t seem like it would be one I’d enjoy. It was promoted heavily as “From the guys who brought you ‘The 40-Year-Old Virgin‘ and ‘Knocked Up’…” neither of which I liked all that much (Virgin was better than Knocked Up, but that’s not saying a whole lot).

But from the beginning, this movie had me alternately moaning and laughing. I have to say that I don’t need to see Jason Segel’s body at any angle ever again (full male frontal nudity was funny, but a little odd). Beyond that however, the cast and situations were funny, cute, and romantic in places.

Who knew Jason Segel could play piano?! He’s a very funny actor on How I Met Your Mother and now I’m going to have to see if I’ve missed any of his other movies. 🙂

Kristen Bell was hot as Sarah Marshall, the shallow TV actress. Mila Kunis was amazing as Rachel Jansen, the front desk clerk at the resort in Hawaii. Bill Hader and Liz Cackowski were hilarious as the warped married couple helping Peter feel better.

Jonah Hill played a very warped character as Matthew the Waiter. I’m not sure whether I should like him or despise him. 🙂 He’s a very funny guy, but I can’t stand most of his characters on screen.

Paul Rudd as Chuck was funny too. The surfing instructor with apparently no long term memory. Hello Memento!

Overall, I thought this was a great movie with amazing one-liners all over the place. If you like funny romantic comedies, this is one I would highly recommend.

And the movie has lots of extras, but the Line-o-Rama and Gag Reel features were my favorites. We were rolling on the ground during both of them.

Definitely worth checking out!

p.s. Rent it at Netflix or pick it up from Amazon: