I like surprises. Well, let me clarify. Sometimes I like surprises. Like when you get a DVD in the mail for a movie you’ve never heard of and it turns out to be a great story with a heart. Fight Night was one such surprise.

Michael Dublin (Chad Ortis) is a fight promoter for a series of underground prize fights. These fights are not always by the rules of conduct. In fact, most of them aren’t. The object is to allow those who enjoy such sport to see and bet on bloody bouts between unknowns. And the fights are definitely bloody and violent. 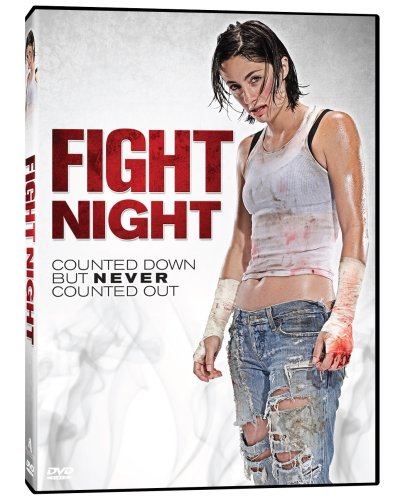 Katherine Parker (Rebecca Neuenswander) is a fighter squatting in an old warehouse when Dublin finds her one night after he tries to rig a fight and gets caught. With some fast punches, she puts down two or three guys twice her size and Dublin sees a ticket to the big time.

On the opposite side of the equation is the guy running the fight ring and profiting handsomely. Clark Richter (Kurt Hanover) is a huge, vicious ex-boxer who knows how to make money off the gamblers, his promoters, and yes, the fighters too.

Over the course of several weeks, Dublin and Parker, who he calls “Kitty Kat,” work their way up the ladder of fights to get to the championship for a shot at serious money. A few indoor fight here, an outdoor fight there… And along the way, they learn a little about each other as their pasts come to catch up with them.

As I said at the beginning, I was quite surprised by Fight Night. The idea isn’t new. The road to redemption is long and has been told a million different ways. And I have to say that I’m not a fan of boxing. Watching two people slug it out in the ring for money or pride has never held much interest for me.

But this movie takes an unlikely pairing of characters on different roads – one who can never go home and the other who desperately wants to go back – and made it a worthwhile journey that leads to a satisfying, though a bit predictable, ending.

Ortis and Neuenswander had a great chemistry on camera. However, of the two, I think Neuenswander was the better actor. She had to not only master the physical demands of the film, but also show emotion through layers of makeup (to add bruises, swelling, and so on) and during tightly choreographed boxing sequences.

And the production values were great as well. This film was shot outdoors during day and night as well as inside a number of locations. The fights (to my lack of boxing experience) seemed very well staged all through the movie. And the soundtrack for the film (from Ryan Adison Amen and Patrick Kirst) did a great job blending into the background at times and amping up the action at times, just as it should have.

In addition to the DVD, there are a few extras, including commentary from director Jonathan Diller, a trailer for the film, and a number of deleted scenes. The only deleted scene that I thought had any weight was “Joe Keller,” which told how Richter beat another boxer to death. However, if it had been left in, one of the surprises towards the end would not have been so compelling.

If you’re looking for an action film or a boxing film, get in the ring with Fight Night. I give it a solid 3 out of 4 stars. Why don’t you give it a few rounds to see how you do with Dublin and Kitty Kat?

p.s. Pick up Fight Night at your local video store or online!