Monsters. Undead creatures. Things from other worlds and dimensions. Each has held an appeal for me since childhood. At first they terrified me, but as I got older and started reading, writing, and playing roleplaying games, they became tools and fun thought experiments.

Add to that a healthy dose of Buffy the Vampire Slayer, War for the Oaks (by Emma Bull), and The Dresden Files books (by Jim Butcher) and you have a love for properties where creatures meet the modern world… These days it’s called “Urban Fantasy,” but in the past it was just horror, science fiction, or fantasy. Now with new urban fantasy titles coming out regularly, I have been in hog heaven… 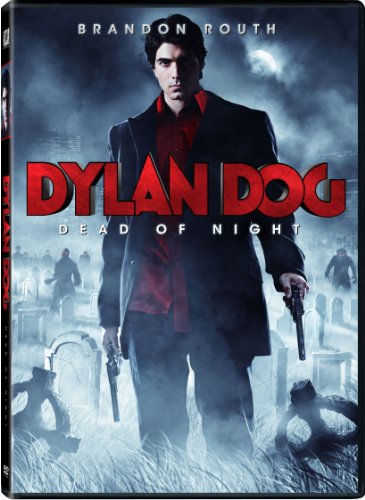 Enter the 2011 film Dylan Dog: Dead of Night. Based on an Italian comic book series from creator Tiziano Sclavi, the story seemed to bring a few genres together into a unique whole. Generally it takes the idea of a Sherlock Holmes or Ichabod Crane (Sleepy Hollow-style, not the animated Disney version) investigator and gives him cases involving the supernatural world with vampires, werewolves, and zombies. Sounds right up my alley, doesn’t it?

Then, when it hit theaters, somehow none of my local theater chains were showing it. I thought that was a bit odd, but started to some very negative reviews coming out in the media, both online and in print. At that point I decided I would have to see it on DVD to figure out if the reviewers were right…

Unfortunately, they were. Dylan Dog is a movie set in a story-rich environment that somehow manages to be about characters I ultimately couldn’t bring myself to care about. How is that possible?

The story sounds good on paper. Dylan Dog (Brandon Routh) is a private eye who used to deal exclusively with supernatural cases. But after the death of his girlfriend/fiancee/wife has fallen on bad times. He and his friend Marcus (Sam Huntington) have been doing cases for cheating husbands and wives, getting footage or pictures of folks in compromising positions.

When a new case comes up and it turns out to have a supernatural angle, Dylan tries to back out of it. But some cases can’t be turned away. After Marcus gets killed by a giant zombie, Dylan is forced to dive back into the world he thought he’d left behind.

All the elements are in the story. A Romeo and Juliet romance between a werewolf girl and a vampire boy. A family of werewolves protecting an artifact for centuries. A group of monster hunters threatening to destroy all unnatural creatures. And a vampire leader (Taye Diggs) taking advantage of a power vacuum with no oversight from inside or outside the supernatural community.

It’s not the location (New Orleans). It’s not the setting, because the world is full of monsters both fun and foul. It has some fun slapstick elements courtesy of Huntington’s role. Even the story seems good at first glance. So is it the actors or the director (Kevin Munroe) who are to blame? Either way it should have been much more fun to watch than it turned out to be.

Beyond the movie on the DVD, there are no extras. This is a very bare-bones DVD release for a movie that totally bombed at the box office.

If you really must see Dylan Dog: Dead of Night, I recommend a rental on Red Box. But if you were looking forward to this flick, you might be better off spending some time reading some of the Dresden Files novels from Jim Butcher or re-watching old Buffy the Vampire Slayer episodes.