Rhona Mitra joins a mishmash of plots from Mad Max, Resident Evil, a bit of Gladiator, and Lara Croft. And you’re left kind of wondering… why you watched this film. The bits and pieces of other plots were better served by those other movies. 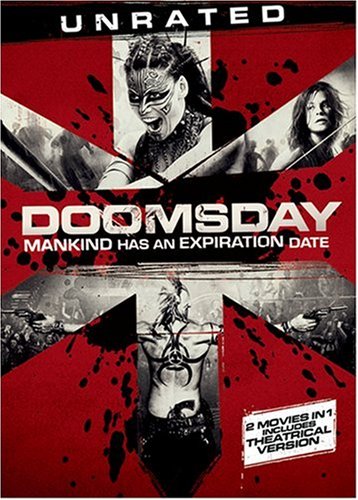 And though Mitra does a fine job as a female action hero, she’s been sucked into a less than great plot along with Bob Hoskins and Malcolm MacDowell.

Doomsday‘s plot revolves around a flu virus that begins eating flesh and killing people, spreading like wildfire in Great Britain. The answer was to build a wall (evidently they’ve been talking to Congress about the wall on the southern border) and basically cut them loose to fend for themselves.

Years later, you end up with an overpopulation problem (imagine that) and a resurgence of the virus, which forces the government to admit that some people have survived on the [gasp] unhealthy side of the wall. They send a team (led by Mitra’s character, Eden) over the wall to see if a scientist (MacDowell) managed to find a cure and bring it back.

You can guess how the mission went.

People on the “other” side of the wall are rightfully upset about being left behind. They live a medieval/Mad Max lifestyle where they may even eat some of their enemies.

From there, the movie breaks down into a bunch of car chases, explosions, and political maneuvering.

Was there anything to like in this film? Well… Rhona Mitra (gorgeous as ever) and Bob Hoskins were good as always, and MacDowell was fine, though his role was pretty poorly written.

What not to like? The rest of it. The eyeball trick seen early in the movie got old quickly. But really the rest relied almost entirely on a series of Mad Max-style road chases.

If you like explosions, bad one-liners, and lots of tattoos and bad hair, this movie is for you. Unfortunately, both my wife and I were not all that impressed. I’m giving it 1 out of 4. Even Rhona Mitra couldn’t save it.

p.s. If you really want to pick this one up on DVD, check it out at the Amazon links below: