It’s not a secret. I like zombies. Maybe not if one tried to gnaw on me like a piece of fried chicken, but I like stories about zombies whether they’re on TV, in print, or on the big screen. So when I heard about Dead Snow last year after Sundance, I knew it had to go on my “To See” list. It finally comes to DVD on February 23, 2010 and I got a sneak peek! 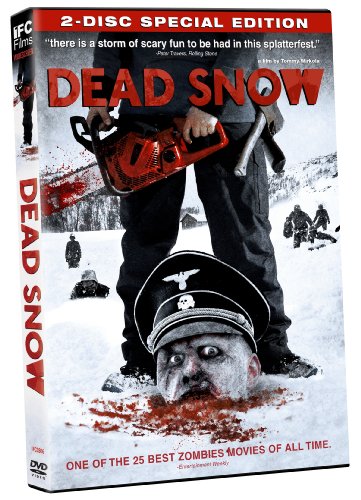 What’s it about? Take one part traditional horror plot with teenagers or 20-somethings, add a vacation cabin in the Norweigian Alps, and… Nazi zombies? Really!? Yes, Nazi zombies. And these guys aren’t messing around…

As the movie starts, we see a girl running through the trees and snow being chased by something or several somethings. It’s not clear what the “somethings” are, but you know they can’t be good. The music used for the opening sequence was an inspired choice and I only wish I knew what it was, but I can’t seem to find the soundtrack anywhere. We’re then introduced to the
beautiful people – four guys and three girls – heading up into the Alps for some skiing, snowmobiling, and fun. And yes, there’s a girl missing – one of the guys’ girlfriends was meeting them up there.

Everything is happy and cheerful until the obligatory weird local guy comes to the door in the middle of the night one night and regales them with stories of the Nazis and locals who had clashed 60 years before. During World War II, a Nazi company occupying the area were driven deep into the mountains and presumed to have frozen to death. He even has the gall to complain about the coffee he’s given as a guest. Once he leaves, everything gets rolling pretty quickly.

Honestly, I think this zombie movie has everything I could have wanted in a horror movie. Cute girls, humor, a bit of T&A, and zombies with a lot of personality. It even includes a zombie attack in the outhouse. Not only is it a gory, bloody mess, but it pays homage to some of the great horror movies of the past, including two of my favorites – Evil Dead and Evil Dead 2. When I saw the chainsaw come out of the shed, I burst out laughing.

Let’s talk about the zombies a bit. These aren’t your usual slow, brainless variety. For 60+ year old zombies, these guys are darn fast. The makeup artist did an amazing job providing unique faces for each zombie and I felt like each zombie actor provided a bit of personality to their characters which was awesome.

If you’re not into blood and guts, I would recommend staying away from Dead Snow. But I was constantly amazed at the variety of ways that zombies and campers could be killed or mutilated. Until this movie, I have never seen a man’s head get ripped apart. In one scene, they actually had a girl awake as a group of zombies pulled out her intestines. Fake blood was used aplenty in this film, liberally splattered across the landscape and the actors.

Also, I have to say that the subtitles didn’t detract from the film at all for me. Usually the actors weren’t talking during the fiercest action scenes, so you weren’t constantly bobbing your head up and down as you tried to keep track of what they were saying and what was happening on screen.

In my new order of zombie favorites, I’ll have to put Dead Snow in my top 5, along with Shaun of the Dead, Zombieland, Resident Evil, and Army of Darkness. Be sure to check it out at your favorite retailer or rental store when it hit shelves February 23!

p.s. Pick up these monsters at Amazon!