Do you like bugs? Creepy crawly slugs? How about frogs? When you were a kid, you probably either gravitated towards these things (I know I did) or ran away from them screaming. And a joint project between Smithsonian Networks and Infinity Entertainment Group wants to remind you of those days. 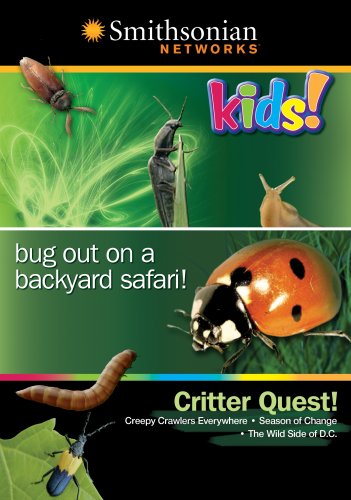 Critter Quest! introduces us to host Peter Schriemer as he explores nature in three episodes of this series from the Smithsonian Channel. Peter lives in a much wetter climate than I do (in Michigan) and you could tell from all the entertaining critters he found just strolling around the yard. But he goes beyond his yard to explore the broader scope of nature a bit of a time, gradually introducing concepts in a kid-friendly way.

This series is definitely aimed at kids. Not only do you learn about various species and bugs (such as the pill bug or rolly poly, which was one of my favorite bugs to find as a kid), but different concepts such as echolocation and migration are explained. In one episode, you are even shown how to create indoor habitats for these critters so you can bring them inside if you are so inclined. My daughters were riveted to each of the episodes included.

In “Creepy Crawlers Everywhere,” Peter introduces himself and explores his back yard looking for various creepy crawlies. During the episode, we learn about the click beetle, slugs, a tree frog, and a jumping spider. I learned that slugs make their own slime, which is what enables them to glide over surfaces (and requires that you wash your hands after handling them).

“Season of Change” explains the many ways animals get ready for the winter. Some creatures forage, such as squirrels, spending the ever shorter days before winter stashing food where they can get to it during the colder months. Some go into hibernation, such as frogs and turtles, choosing to go into a deep sleep when food is scarce. And then Peter talks about the many birds who migrate to warmer climates to find more food. He had a chance to interact closely with a Red Tailed Hawk, which is great because they’re one of the raptors we have even around my house in Colorado.

And then in “The Wild Side of D.C.,” we’re introduced to the many animals who live in Washington D.C. (beyond the political animals that migrate there several times a year). Peter was able to explore a part of the Smithsonian Institution and show us a huge millipede they have in a collection there, as well as the many Canadian Geese, squirrels, ducks, and other animals who live in the urban landscape.

Critter Quest! is an award-winning series on the Smithsonian Network, including a Silver Parent’s Choice Foundation Award, the 2008 Cine Golden Eagle Award, and an American Conservation Film Festival Award for “Children’s Programming.” I think it’s definitely earned those awards and we would love to see additional episodes in the series.

That said, the lack of extras my only disappointment with the DVD. It only includes three short episodes of the series and no additional material. There are previews for other series, such as Stories from the Vaults, but I would have liked to have seen some additional resources for parents or children about the many topics covered.

However, I know I found Peter an engaging young host and the series worked well for my kids, keeping them interested for all three episodes.

If you like nature programs and are looking for some new options for your own children or a school, I think Critter Quest! is a great addition to your DVD library.

p.s. Be sure to check this one out at Amazon: